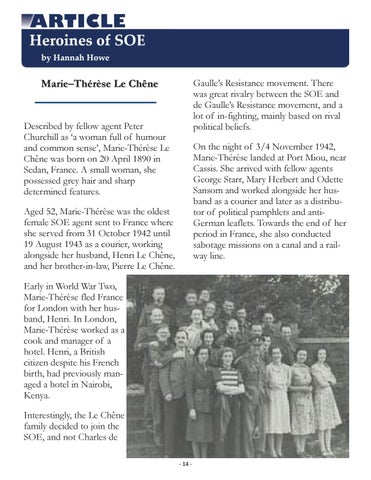 Described by fellow agent Peter Churchill as ‘a woman full of humour and common sense’, Marie-Thérèse Le Chêne was born on 20 April 1890 in Sedan, France. A small woman, she possessed grey hair and sharp determined features.

On the night of 3/4 November 1942, Marie-Thérèse landed at Port Miou, near Cassis. She arrived with fellow agents George Starr, Mary Herbert and Odette Sansom and worked alongside her husband as a courier and later as a distributor of political pamphlets and antiGerman leaflets. Towards the end of her period in France, she also conducted sabotage missions on a canal and a railway line.

Aged 52, Marie-Thérèse was the oldest female SOE agent sent to France where she served from 31 October 1942 until 19 August 1943 as a courier, working alongside her husband, Henri Le Chêne, and her brother-in-law, Pierre Le Chêne. Early in World War Two, Marie-Thérèse fled France for London with her husband, Henri. In London, Marie-Thérèse worked as a cook and manager of a hotel. Henri, a British citizen despite his French birth, had previously managed a hotel in Nairobi, Kenya. Interestingly, the Le Chêne family decided to join the SOE, and not Charles de - 14 -