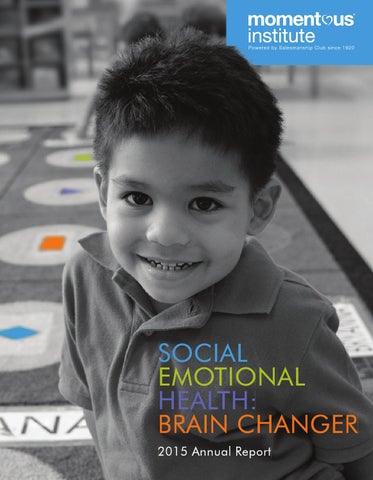 In 1920, Salesmanship Club of Dallas formed and members determined they would develop programs dedicated to transforming kids’ lives. Now, 95 years later, Salesmanship Club stands at 650 members strong — each one dedicated to sustaining that commitment which has always been at the heart of the Club. In pursuit of that vision, Momentous Institute is now comprised of Momentous School, Therapeutic Services and Research and Training, including our annual Changing the Odds conference (which will celebrate its 5th anniversary this October!). After nearly a century of learning and growing, our vision has crystallized: Social Emotional Health for all kids so they can achieve their full potential. Social Emotional Health because it is predictive of long-term success. Social Emotional Health because it acts as a buffer for children managing toxic stress, trauma and abuse. Social Emotional Health … because it is a brain changer.

so they can achieve their full potential.

Children with strong social emotional health are in control of themselves, communicate well, problem solve, and are empathetic, grateful, gritty and optimistic. 2

owned and operated by Salesmanship Club of Dallas, has been building and repairing social emotional health for kids since 1920. Each year, we directly serve more than 6,000 kids and family members through our nationally acclaimed Momentous School and innovative Therapeutic Services.

We also invest in research and training, including the annual Changing the Odds conference, to reach far more children than we could ever serve directly. We use our direct work with families to equip educators, mental health professionals, parents and decision makers with trauma-informed strategies that strengthen social emotional health. 4

Teaching kids the basic biology of their emotions gives them a sense of control and helps them manage their behavior.

Just one attuned and predictable relationship with an adult can make all the difference in a childâ&amp;#x20AC;&amp;#x2122;s long-term success.

Kids who develop gratitude, optimism and self-awareness are able to monitor how their behavior impacts others.

Integrated InďŹ&amp;#x201A;uencer: Stressing the importance of contribution over achievement inspires kids to become change agents and make a positive difference in our world.

Understanding Others: Kids who take the perspective of others and empathize are able to develop respectful and caring relationships.

In Therapeutic Servicesâ&amp;#x20AC;Ś Where are clients being seen?

By age and number of clients

EXPANDING OUR REACH Helping Kids We Will Never Meet

Places we trained States represented at our Dallas trainings

The goal of our 4th annual Changing the Odds conference was three-fold: stir your mind, stir your heart and stir you to action.

The 2015 conference focused on the importance of safe relationships as the foundation for strong social emotional health.

I loved the creativity of the presentations. It connected to both sides of our brains!

Glennon Doyle Melton, founder of the blog Momastery.com, shared her wit and candor, encouraging everyone to show their real, messy and beautiful selves. With record attendance, we welcomed more than 1,400 educators, mental health professionals, parents and decision makers from 25 states.

Kevin Carroll capped the two-day conference, reminding everyone the importance of play.

THE TOURNAMENT THAT TRANSFORMS

Since 1968, the AT&amp;T Byron Nelson, hosted and managed by Salesmanship Club of Dallas, has raised more than $143 million to benefit Momentous Institute.