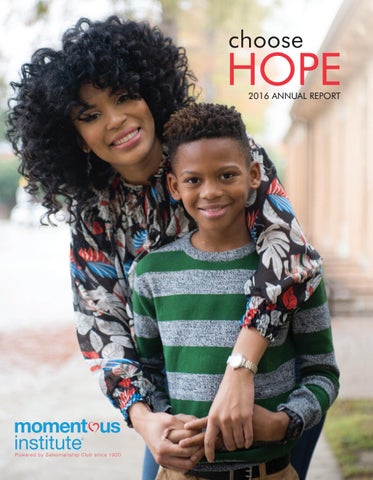 Choose hope. Choose kindness. Choose relationships. Choose perseverance. Choose social emotional health. The research is clear: When trauma and toxic stress dominate a child’s life, social emotional health acts as a buffer to that hardship. Social emotional health is the ability to understand and manage one’s emotions, reactions and relationships. It literally changes kids’ brains and paves the way for children and families to achieve their full potential. Every day we choose hope because it’s hopelessness that keeps cycles of poverty and trauma alive. Without hope and the belief that things can get better, the motivation and energy needed to break the cycle simply aren’t there. Momentous Institute and Salesmanship Club of Dallas are grateful to partner with incredible individuals and systems equally devoted to changing the odds for kids and making way for our future leaders. After 97 years of working tirelessly on behalf of kids and their families, we can’t help but reflect on what we have learned over the last century and what we hope to accomplish in the next. We hold hope — unwavering hope — that Dallas will become a city as good for kids as it is for business. It won’t happen overnight, but it absolutely is within our city’s reach.

Social emotional health for all kids so they can achieve their full potential.

We also invest in research and training, including the annual Changing the Odds conference, to reach far more children than we could ever serve directly with trauma-informed strategies that strengthen social emotional health.

Since 1920, Momentous Institute, owned and operated by Salesmanship Club of Dallas, has been committed to building and repairing social emotional health for all kids so they can achieve their full potential. Each year, we directly serve more than 6,000 kids and family members through our nationally acclaimed Momentous School and innovative Therapeutic Services.

Jayden and her grandmother, Elaine

Blair and her father, Joshua

Social emotional health is the ability to understand and manage one’s emotions, reactions and relationships.

Percentage of clients by age

of children with an identified social, emotional and/or behavioral challenge significantly improved their functioning

Helping far more kids than we could ever serve directly by investing in research and training.

States represented at our Dallas trainings Places we presented

OF ALL TRAINED WORK IN DALLAS-FORT WORTH AREA

Our 5th annual Changing the Odds conference, Compassion: Brain Changer, focused on how essential social emotional health habits, like mindfulness, gratitude and kindness, rewire the brain and enhance the capacity for compassion.

Richie Davidson noted generosity is the “single best way” to activate circuits in the brain that impact well-being.

From keynotes to connections, the conference aims to provide a newfound spark for attendees as they help change the odds for kids in their communities.

Lizzie Velásquez charmed the audience with her humor and candor, encouraging everyone to “be the hero of your own story.”

Special thanks to our valued partners — volunteers, donors, foundations and corporations — who help make our work possible (gifts greater than $100,000 made directly to Momentous Institute in 2016 reﬂected below).

Since 1968, the AT&amp;T Byron Nelson, hosted and managed by Salesmanship Club of Dallas, has raised more than $150 million to benefit Momentous Institute.