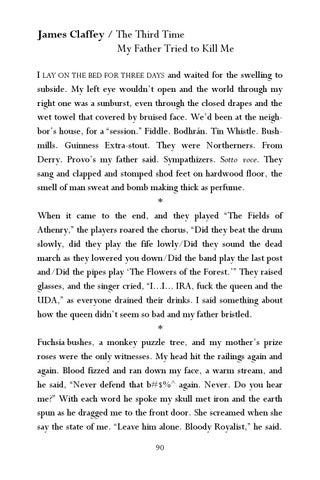 James Claffey / The Third Time My Father Tried to Kill Me I LAY ON THE BED FOR THREE DAYS and waited for the swelling to subside. My left eye wouldn’t open and the world through my right one was a sunburst, even through the closed drapes and the wet towel that covered by bruised face. We’d been at the neighbor’s house, for a “session.” Fiddle. Bodhrán. Tin Whistle. Bushmills. Guinness Extra-stout. They were Northerners. From Derry. Provo’s my father said. Sympathizers. Sotto voce. They sang and clapped and stomped shod feet on hardwood floor, the smell of man sweat and bomb making thick as perfume. * When it came to the end, and they played “The Fields of Athenry,” the players roared the chorus, “Did they beat the drum slowly, did they play the fife lowly/Did they sound the dead march as they lowered you down/Did the band play the last post and/Did the pipes play ‘The Flowers of the Forest.’” They raised glasses, and the singer cried, “I...I... IRA, fuck the queen and the UDA,” as everyone drained their drinks. I said something about how the queen didn’t seem so bad and my father bristled. * Fuchsia bushes, a monkey puzzle tree, and my mother’s prize roses were the only witnesses. My head hit the railings again and again. Blood fizzed and ran down my face, a warm stream, and he said, “Never defend that b#$%^ again. Never. Do you hear me?” With each word he spoke my skull met iron and the earth spun as he dragged me to the front door. She screamed when she say the state of me. “Leave him alone. Bloody Royalist,” he said. 90