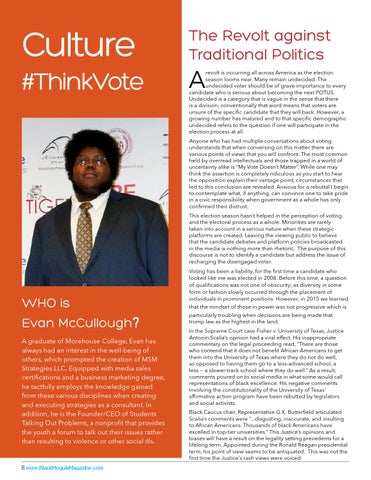 The Revolt against Traditional Politics

revolt is occurring all across America as the election season looms near. Many remain undecided. The undecided voter should be of grave importance to every candidate who is serious about becoming the next POTUS. Undecided is a category that is vague in the sense that there is a division; conventionally that word means that voters are unsure of the specific candidate that they will back. However, a growing number has matured and to that specific demographic undecided refers to the question if one will participate in the election process at all. Anyone who has had multiple conversations about voting understands that when conversing on this matter there are various points of views that you will confront. The most common held by overread intellectuals and those trapped in a world of uncertainty alike is “My Vote Doesn’t Matter”. While one may think the assertion is completely ridiculous as you start to hear the opposition explain their vantage point, circumstances that led to this conclusion are revealed. Anxious for a rebuttal I begin to contemplate what, if anything, can convince one to take pride in a civic responsibility when government as a whole has only confirmed their distrust. This election season hasn’t helped in the perception of voting and the electoral process as a whole. Minorities are rarely taken into account in a serious nature when these strategic platforms are created. Leaving the viewing public to believe that the candidate debates and platform policies broadcasted in the media is nothing more than rhetoric. The purpose of this discourse is not to identify a candidate but address the issue of recharging the disengaged voter.

WHO is Evan McCullough? A graduate of Morehouse College, Evan has always had an interest in the well-being of others, which prompted the creation of MSM Strategies LLC. Equipped with media sales certifications and a business marketing degree, he tactfully employs the knowledge gained from these various disciplines when creating and executing strategies as a consultant. In addition, he is the Founder/CEO of Students Talking Out Problems, a nonprofit that provides the youth a forum to talk out their issues rather than resulting to violence or other social ills.

Voting has been a liability, for the first time a candidate who looked like me was elected in 2008. Before this time, a question of qualifications was not one of obscurity; as diversity in some form or fashion slowly occurred through the placement of individuals in prominent positions. However, in 2015 we learned that the mindset of those in power was not progressive which is particularly troubling when decisions are being made that trump law as the highest in the land. In the Supreme Court case Fisher v. University of Texas, Justice Antonin Scalia’s opinion had a viral effect. His inappropriate commentary on the legal proceeding read, “There are those who contend that it does not benefit African-Americans to get them into the University of Texas where they do not do well, as opposed to having them go to a less-advanced school, a less -- a slower-track school where they do well.” As a result, comments poured on to social media in what some would call representations of black excellence. His negative comments involving the constitutionality of the University of Texas’ affirmative action program have been rebutted by legislators and social activists. Black Caucus chair, Representative G.K. Butterfield articulated Scalia’s comments were “...disgusting, inaccurate, and insulting to African Americans. Thousands of black Americans have excelled in top-tier universities.” This Justice’s opinions and biases will have a result on the legality setting precedents for a lifelong term. Appointed during the Ronald Reagan presidential term, his point of view seems to be antiquated. This was not the first time the Justice’s rash views were voiced

#Think Vote OUR BIGGEST ISSUE YET! How Bill &Hillary Clinton Bamboozled Black America into a new form of slavery. The successes of the Obama Presidency. Business Moguls you need to know. How politics & economics go hand in hand. WHY Donald Trump may be good for Black Entrepreneurs. Black Humanitarians. This one is dedicated to my momma RIP! 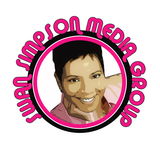