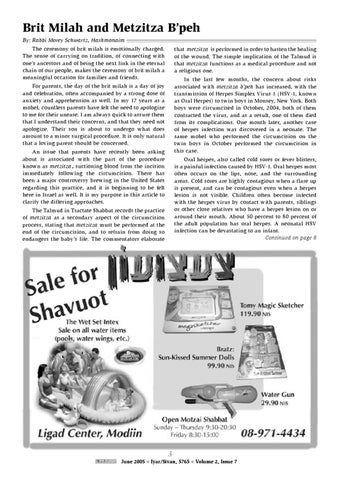 that metzitza is performed in order to hasten the healing of the wound. The simple implication of the Talmud is that metzitza functions as a medical procedure and not a religious one. In the last few months, the concern about risks associated with metzitza b’peh has increased, with the transmission of Herpes Simplex Virus 1 (HSV-1, known as Oral Herpes) to twin boys in Monsey, New York. Both boys were circumcised in October, 2004, both of them contracted the virus, and as a result, one of them died from its complications. One month later, another case of herpes infection was discovered in a neonate. The same mohel who performed the circumcision on the twin boys in October performed the circumcision in this case.

For parents, the day of the brit milah is a day of joy and celebration, often accompanied by a strong dose of anxiety and apprehension as well. In my 17 years as a mohel, countless parents have felt the need to apologize to me for their unease. I am always quick to assure them that I understand their concerns, and that they need not apologize. Their son is about to undergo what does amount to a minor surgical procedure. It is only natural that a loving parent should be concerned. An issue that parents have recently been asking about is associated with the part of the procedure known as metzitza , suctioning blood from the incision immediately following the circumcision. There has been a major controversy brewing in the United States regarding this practice, and it is beginning to be felt here in Israel as well. It is my purpose in this article to clarify the differing approaches.

Oral herpes, also called cold sores or fever blisters, is a painful infection caused by HSV-1. Oral herpes most often occurs on the lips, nose, and the surrounding areas. Cold sores are highly contagious when a flare up is present, and can be contagious even when a herpes lesion is not visible. Children often become infected with the herpes virus by contact with parents, siblings or other close relatives who have a herpes lesion on or around their mouth. About 50 percent to 80 percent of the adult population has oral herpes. A neonatal HSV infection can be devastating to an infant. Continued on page 8

The Talmud in Tractate Shabbat records the practice of metzitza as a secondary aspect of the circumcision process, stating that metzitza must be performed at the end of the circumcision, and to refrain from doing so endangers the baby’s life. The commentators elaborate

To supplement or not to supplement, that is the question. Serving the English speaking community of Modiin and the surrounding neighborhoods 1 1 I am routinely asked many questions from parents regarding fluoride. Should children be given fluoride supplements? Is there fluoride in the water here in Modi’in? Can a child receive too much fluoride? Should adults receive fluoride as well? Continued on page 4 By: Daniella Hellerstein and Caryn Meltz By: Dr. Dan Cheifetz