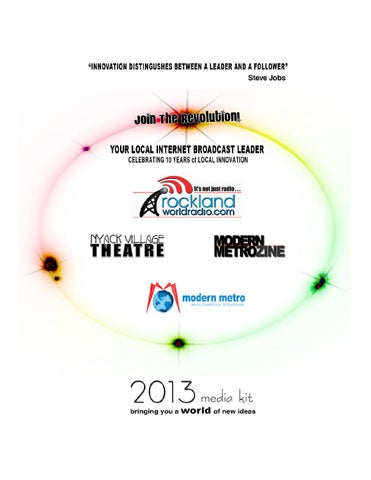 Rockland World Radio launched in 2003, has become Rockland County’s leading media company, providing Rockland arts, business and community access to quality on line broadcasting. An original pioneer in the industry we have evolved and grown with the advancement of the Internet, which has become more important to people’s lives than traditional media. As the largest producer of local live programming in the county, Rockland World Radio has accumulated an extensive archive library with thousands of hours of content and continues to create relative and vital programming for our local community. Rockland World Radio is the local Internet broadcast leader and poised to take on the next ten years with even more cutting-edge programming and distribution. Through its afﬁliates, Nyack Village Theatre, Modern Metrozine and our social networking sites, Rockland World Radio’s strong presence entertains over 30,000 per month, with its local and regional audience. Modern Metro is the production backbone to Rockland World Radio, Nyack Village Theatre and publishes the online magazine MMZ. We provide the technical know-how, the experience and the creativity needed to design, develop and deliver your project in a powerful way to a wide variety of media. As Rockland’s most prominent production studio, Modern Metro has provided clients such as Ciesen Columbia University, Random House, JCC Rockland, Lannett Pharmaceuticals, Big Apple Circus, Rockland Economic Development Corporation, RSI Focal Search, United Hospice of Rockland, YMCA, IMC Integrated Medical Care, Eastern Planning Financial Services, the utmost in professional production services. Nyack Village Theatre offers the community a stage for regional and local entertainment including music, movies, poetry, comedy, cultural programs, and theatre among other performances. Most Nyack Village Theatre events are broadcast live and archived for play on demand 24/7 on Rockland World Radio. These archives are a valuable promotional tool for reaching a speciﬁc target market. Modern Metrozine (MMZ), our on line magazine, features articles from program hosts and local contributors includes the Rockland World Radio program guide and Nyack Village Theatre event listings offers the ability to link off the advisement directly to the business’ website, a virtual doorway to your store or business.

PLUS DOZENS OF PROGRAMS IN THE VAULT With an audience reaching over 95,000 per month!

The Nyack Village Theater sign is humble and you might just walk by, but one exposure to the live and broadcasted content on the second ﬂoor will stop you in your tracks. Nestled one story above the site that once was F.W. Woolworths is an expanding multimedia arts organization founded by rocker Richard Quinn. The media center appeared on my radar screen last Halloween, when I saw a poster advertising a midnight showing of The Rocky Horror Picture Show. As a teenager, I saw the cult classic more times than I care to admit across the street when what is nowRiverspace was a garden-variety movie theater. The Halloween show was cancelled by the freak snowstorm that provided this winter season’s only blizzard, and will be screened again, says Quinn. But my focus was frozen on the venue and Quinn, the resident impresario. When Rocky Horror exploded onto the counter-cultural consciousness of America in 1975, Richard graduated high school and soon began getting into New York City clubs like Max’s Kansas City and C.B.G.B.’s to see groups like Talking Heads, Lou Reed, Patti Smith, The Ramones and Blondie. His band Quinn & The Eskimos would play those same venues in the years to come.

The Nyack Village Theatre that Quinn opened December 2007 is inﬂuenced by the energy and eclecticism of the New York art scene of the early 1980’s. It was in the economically ravaged east village that Punk, New Wave, Hip Hop and Grafﬁti were cross-pollinated in downtown nightclubs and art galleries. “I like to think of myself in the tradition of Andy Warhol. I’m building an art factory.” If the Nyack Village Theatre is a factory, there are several divisions that manufacture a variety of art products. The theatre is actually a spin off of two other endeavors. In 2003, Quinn launched Rockland World Radio, the online broadcast station that’s not just radio as it also streams live video programming is entering its tenth year. Modern Metro Zine or MMZ offers the insights and expertise of the hosts of the Internet programs in print form. The media platform that Quinn has built is like a dim sum menu of all that was excellent about New York City in the late twentieth century. It’s a mash up of some of my several pioneering cultural institutions combing the political edge of WBAI, the bold experimentalism of Joseph Papp’s Public Theater, the bombast of CBGB’s and the intimate screening room vibe of the Thalia.

A recent Wednesday evening will give you a ﬂavor of the content of Rockland World Radio: local attorney Glen Keene sits at a table at the center of the stage of the Nyack Village Theatre interviewing local poet Rose Marie Raccioppi. The program is streamed live over the Internet. At the end of his hour segment, John Marshall arrives with his sons, Zachary and Quincy for their teen focused hip-hop program, Youthology Hour. The teens are both the production staff and hosts for their program. Then, one of many health and holistic programs Creating Health, hosted by Dr. Ken Davis. The evening ends with Talk About it Cora!, a show on style, beauty, glamour and fashion. The production facilities are an ideal location to incubate local talent. Quinn has been working recently with musicians the Paul brothers, Charles, Martin and Jermaine. You may have seen Jermaine on the hit reality talent show, The Voice. Jermaine recently survived the battle rounds and singing for the votes in front of a live national TV audience. Quinn produced the look for the music video “Can’t Walk Away” and is in the process of booking the (brother’s band) Mighty Paul Brothers concert dates at the theatre. Quinn is proudest of his most recent creative coup: his new resident theater group the Antics Road Show. The Original Sketch Comedy group has had sold out shows for two runs and has a new series of shows scheduled for May, July and August. Antic’s also offers improv, acting and writing workshops. The Nyack Village Theater is a place where Quinn told me he hoped to introduce the public to art, performance and information that they can’t ﬁnd anywhere else. When I heard him utter that statement, my jaded and skeptical self spoke up. I challenged him to name something that he had produced lately that ﬁts that bill.

In a New York minute Quinn described the screening of never before seen footage from an unreleased documentary about Jimi Hendrix by Dave Kramer. The ﬁlm was accompanied by a showing of original artwork created by Jimi Hendrix owned by the family of drummer Christian Van den Hueval. Quinn’s hype minus the hyperbole is refreshing. On Sunday, during the Nyack’s Street Fair Quinn showed a free matinee exhibition of the “Fresh, the ﬁlm.” He told me that the ﬁlmmakers decry the collapse of the symbiotic cycle between animals and plants that has resulted from the advent of corporate agriculture and jeopardizes our health and our food supply. Quinn feels that there is a similar life cycle between the artist and the audience. “The artist needs the audience to exist and the audience needs art to survive. Art is nourishment for the soul,” said Quinn. So if you are hungry for some art, Quinn serves it up on line, in print and on stage. The concepts and content might be heavy, but its calorie and gluten free. Bon Appétit. 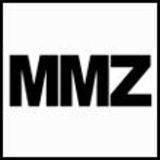