Featured on cover: When She Roars Artwork ÂŠ Lavett Ballard 2

Lavett Ballard When She Roars presented by Long-Sharp Gallery

With the publication of this catalogue, we are delighted to announce Long-Sharp Gallery’s representation of Lavett Ballard and the opening of her first solo exhibit with our gallery, When She Roars. I first came across Ballard’s work in 2018. When my husband and I acquired and hung our first of her works, I could not take my eyes off it. I walk past the painting several times each day and take notice of it each time. It is work that commands one’s attention, not loudly, but persistently. It is work that asks questions. It challenges. The more one looks, the more one sees. Many others have been captivated by Ballard’s work. Indeed, her audience grew exponentially in March of 2020 when TIME Magazine’s cover featured her work depicting Rosa Parks (at left, collage on reclaimed fence, not for sale). As an aside, one can buy a reproduction of the “cover art”, as TIME calls it, but the artist receives nothing from the purchase. If we are the first to introduce you to Ballard’s work, it is our privilege. To those, I hope you are as impacted as I continue to be. If you are already in the LB “fan club”, as it were, I hope you will join us in welcoming her to Long-Sharp Gallery. Our heartfelt thanks to Dr. Tanisha Jackson for writing the foreword to this catalogue, to Anthony Ballard for his assistance with logistics, to Emperia Ltd. for their creativity in designing the virtual exhibition that accompanies this exhibit, and to the collectors who support the artists making their way.

When She Roars: Creating a space for when and where we enter Tanisha M. Jackson, Ph.D.

“When she is quiet, she is ignored. But the world stands to attention when she roars.” Lavett Ballard

The Year 2020 marks when the 19th Amendment to the U.S. Constitution granted American women the right to vote 100 years ago. It took almost a century of protest, and the demand for women’s suffrage became the cornerstone for the women’s rights movement. This monumental gain involved the collective efforts of many, including Black women, whose silence is often predicated by the intersection of race and gender. Notwithstanding, Black women in the United States have always played a significant hand in the nation’s turning points. I am reminded of this when I look at the visual artwork of Lavett Ballard. She reconfigures images on reclaimed wooden fences and adds vibrant colors to tell the herstory of powerful Black women. When I first came across Ballard’s artwork, I was drawn to the unique materials she uses to center African Diaspora experiences. The texture and the use of reclaimed wood remind me of what playwright August Wilson so eloquently wrote in his 1985 play Fences, “(s)ome people build fences to keep people out, and some people build fences to keep people in.” However, Ballard introduces another utility of fences in her work when she uses the medium to pull in her audience. She does this by collecting and repurposing photographs that chronicle her family history and pictures she pulls from historical archives. These images, adorned with paint and other materials, speak to what Ballard describes as her strong affinity for imagery and history that has led her to focus on creating a visual lexicon of African American, female, self-identity. The materials she uses also serve as a perfect composition for Ballard’s attempt to reclaim and restore the history and present-day experiences of people whose voices are often stifled, distorted, or pushed to the periphery. In conversation with Ballard, I’ve also come to understand that this artist is a feminist who subtly presents her political stance. Her artmaking process serves as an “asymmetrical emotional balance” as she first selects gorgeous portraits of African American women from archives and adds gold foil to show their regality along with tribal marks on their faces to connect them to Africa. Yet, alongside their beauty, Ballard simultaneously shows these women’s pain and struggles. The duality of beauty and pain gives more complexity to the figures in Ballard’s work and their metaphorical roars. It adds explicitly to viewers’ understanding that Black women are multifaceted and diverse in their experiences while simultaneously sharing everyday experiences. In 2017, Ballard created her first large wooden fence artwork, When She Roars, that centers the historical figure, Mattie Howard, a young 17-year old Civil Rights protester that photographers captured being arrested during the 1963 Children’s Crusade march in Birmingham, Alabama. This historical photo originally includes two Birmingham police officers holding Howard’s stretched out arms and hands at each end. Ballard replaces the officer on the right side of Howard with an image of three young women from the Black Panther Party (Los Angeles Chapter), and one of the women is now holding Howard’s hand. Ballard’s technique of superimposing these two hands together creates a narrative that the women from the Black Panther Party are holding Howard up. It sends a message of sisterhood and “we got you” that is integral to Black women’s experience and survival as a collective. Also in When She Roars (2017) are other images of Black women protesting with fists in the air that add to the motif of peaceful protest found in different

wood collages such as Resistance (2019), and We Shall Not Be Moved (2020), a mixed media collage featured on the cover of TIME Magazine’s March 2020 issue in celebration of Women’s History Month and the 100th anniversary of the 19th Amendment. We Shall Not Be Moved (2020) shows the iconic image of Rosa Parks along with unsung heroes and pictures from the Civil Rights Movement. Ballard’s homage to Black women’s participation in securing justice and equality is a visual documentation of Black women’s roars and efficacy. And, she successfully brings together figures from various periods and geographical locations. As one of a very selective cohort of artists whose artwork is featured in the TIME Magazine issue, this platform extends and lights Ballard’s path as she rises as an artist of prominence who is roaring out through her visual narratives. Ballard’s wooden fence sculptures are particularly interesting because of their scale and the opportunity she takes to tell Black women’s stories from multiple angles. First, they are typically 72-inches high and are sometimes exhibited as diptych and triptych installations surrounded by potting soil at their base. The large-scale pieces in Ballard’s exhibition add a grounding effect and a sense of Black women roaring, much like when a peacock spreads its tail to get attention, and you see its vibrant colored feathers. Like peacocks, Ballard is also trying to get us to pay attention and forces us to engage with her work; we have no way of avoiding these images. However, Ballard’s large installations are tempered by smaller images layered with just enough pop of color and painted objects that compel viewers to look closer to see the details. Similarly, Ballard calls for our attention by making full use of these in the round sculptures. On the backside of the large installations are what she calls “shadow figures” that complement the narratives conveyed on the artwork’s front side. For example, in one of Ballard’s newest works, She Has Risen (2020), she uses soft pastel colors on dark wood to tell the story of young girls and women rising up and coming into their own within their respective communities. Another imagery speaks to Black women’s contribution to nationhood when we consider a figure of an older Black woman sewing an American flag. These figures are collectively surrounded by beautiful flowers, patterns, and white orbs of light that guide our eyes through a complete journey of the piece. Notwithstanding, when we enter a gallery approaching the backside of She Has Risen (2020), we are introduced to a shadow figure. There stands the silhouette of a Black woman holding up orbs of gold, bronze, and copper lights that serve as planets. Ballard subtly creates hair through burnt and smudged wood, and there are orbs of light adorned on the figure as a headdress and necklace that drizzles down her body. Like the images on the front side of this sculpture, the shadow figure has risen and controls the light. Like all of the shadow figures in Ballard’s work, this figure pulls us closer into the artwork so that regardless of which side you approach her sculptures, you get the same narrative floating between both sides. Shadows reflect the figures without seeing the literal context and exist because of the blocking out of light. Metaphorically, Ballard’s shadow figures serve as a counterpart to the self that encompasses a bit of mystic. Conceptually, these shadows bring another layer of meaning to When She Roars because the roars of the shadows are the unmanifested and unheard lessons, dreams, and characteristics of Black women that often get buried and marginalized. Ballard visually gives “space” to the unknown parts of Black women that show their complexity and vulnerability. Even as they roar, Black women hold on to their softness and femininity, which is equally as important as being heard. As we navigate uncertain times due to a global health pandemic (COVID-19) compounded by what feels like insurmountable odds brought on by racial tension in the United States, in particular, this exhibition is a timely conversation that gives new meaning to the hashtag “Say Her Name.” Ballard has created a space for healing, and wellness, during a time when many of us feel fragmented and isolated. She makes a sense of “place” for the images she so carefully excavates and researches to bring them the visibility they so often have been denied but rightfully deserve. And, most importantly, Ballard challenges emerging generations of scholars and collectors to raise questions about how more space can be given to artists like her to provide a complete picture of all of those involved in forming a more perfect union.

Lavett Ballard holds a dual Bachelor’s degree in Studio Art and Art History with a minor in Museum Studies (Rutgers University), as well as a MFA in Studio Arts (University of the Arts, Philadelphia).

Ballard describes her work as a re-imagined visual narrative of people of African descent. Her use of imagery reflects social issues affecting primarily Black women’s stories within a historical context. Her current body of work uses collaged photos adorned with paint, oil pastels, and metallic foils. These photos are deconstructed and layered on reclaimed wood fences; the use of fences is a symbolic reference to how fences keep people in and out physically, just as racial and gender identities do so socially. The fusion of wood and photography offers artwork that both explores Ballard’s southern roots, as well as visually speaks volumes to continuing themes within her community. Her artwork has been featured on the cover of TIME Magazine, selected for the “100 Women of the Year” edition in 2020. Named by Black Art in America as one of the Top 10 Female Emerging Artists to Collect, Ballard has placed works in the private collections of the African American Museum of Philadelphia, the Colored Girls Museum, the Petrucci Family Foundation Collection, and the Grant and Tamia Hill Private Collections.

When She Roars Long-Sharp Gallery Virtual

How Qualified Do I Have To Be? 2018 MIXED MEDIA/COLLAGE ON RECLAIMED WOOD 39 X 41 INCHES SOLD 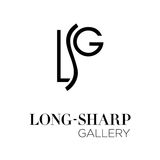