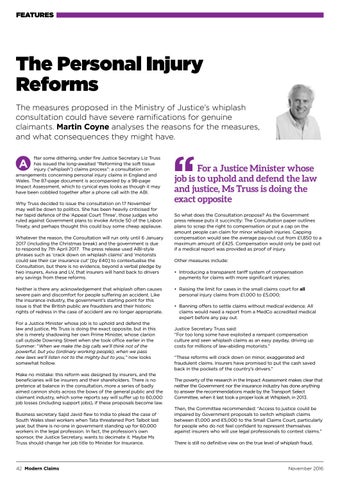 The Personal Injury Reforms The measures proposed in the Ministry of Justice’s whiplash consultation could have severe ramifications for genuine claimants. Martin Coyne analyses the reasons for the measures, and what consequences they might have. fter some dithering, under fire Justice Secretary Liz Truss has issued the long-awaited “Reforming the soft tissue injury (‘whiplash’) claims process”: a consultation on arrangements concerning personal injury claims in England and Wales. The 87-page document is accompanied by a 98-page Impact Assessment, which to cynical eyes looks as though it may have been cobbled together after a phone call with the ABI.

Why Truss decided to issue the consultation on 17 November may well be down to politics. She has been heavily criticised for her tepid defence of the ‘Appeal Court Three’, those judges who ruled against Government plans to invoke Article 50 of the Lisbon Treaty, and perhaps thought this could buy some cheap applause. Whatever the reason, the Consultation will run only until 6 January 2017 (including the Christmas break) and the government is due to respond by 7th April 2017. The press release used ABI-style phrases such as ‘crack down on whiplash claims’ and ‘motorists could see their car insurance cut’ [by £40] to contextualise the Consultation, but there is no evidence, beyond a verbal pledge by two insurers, Aviva and LV, that insurers will hand back to drivers any savings from these reforms. Neither is there any acknowledgement that whiplash often causes severe pain and discomfort for people suffering an accident. Like the insurance industry, the government’s starting point for this issue is that the British public are fraudsters and their historic rights of redress in the case of accident are no longer appropriate. For a Justice Minister whose job is to uphold and defend the law and justice, Ms Truss is doing the exact opposite, but in this she is merely shadowing her own Prime Minister, whose clarion call outside Downing Street when she took office earlier in the Summer: “When we make the big calls we’ll think not of the powerful, but you (ordinary working people), when we pass new laws we’ll listen not to the mighty but to you,” now looks somewhat hollow. Make no mistake: this reform was designed by insurers, and the beneficiaries will be insurers and their shareholders. There is no pretence at balance in the consultation, more a series of badly aimed cannon shots across the bows of the general public and the claimant industry, which some reports say will suffer up to 60,000 job losses (including support jobs), if these proposals become law. Business secretary Sajid Javid flew to India to plead the case of South Wales steel workers when Tata threatened Port Talbot last year, but there is no-one in government standing up for 60,000 workers in the legal profession. In fact, the profession’s own sponsor, the Justice Secretary, wants to decimate it. Maybe Ms Truss should change her job title to Minister for Insurance.

For a Justice Minister whose job is to uphold and defend the law and justice, Ms Truss is doing the exact opposite So what does the Consultation propose? As the Government press release puts it succinctly: The Consultation paper outlines plans to scrap the right to compensation or put a cap on the amount people can claim for minor whiplash injuries. Capping compensation would see the average pay-out cut from £1,850 to a maximum amount of £425. Compensation would only be paid out if a medical report was provided as proof of injury. Other measures include: • Introducing a transparent tariff system of compensation payments for claims with more significant injuries; • Raising the limit for cases in the small claims court for all personal injury claims from £1,000 to £5,000; • Banning offers to settle claims without medical evidence. All claims would need a report from a MedCo accredited medical expert before any pay out. Justice Secretary Truss said: “For too long some have exploited a rampant compensation culture and seen whiplash claims as an easy payday, driving up costs for millions of law-abiding motorists.” “These reforms will crack down on minor, exaggerated and fraudulent claims. Insurers have promised to put the cash saved back in the pockets of the country’s drivers.”   The poverty of the research in the Impact Assessment makes clear that neither the Government nor the insurance industry has done anything to answer the recommendations made by the Transport Select Committee, when it last took a proper look at Whiplash, in 2013. Then, the Committee recommended: “Access to justice could be impaired by Government proposals to switch whiplash claims between £1,000 and £5,000 to the Small Claims Court, particularly for people who do not feel confident to represent themselves against insurers who will use legal professionals to contest claims.” There is still no definitive view on the true level of whiplash fraud, Welcome to issue 22 of Modern Claims Magazine. In this issue, we speak to cover star and head of Claims Crime Prevention at LV=, Clare Lunn...

Welcome to issue 22 of Modern Claims Magazine. In this issue, we speak to cover star and head of Claims Crime Prevention at LV=, Clare Lunn...