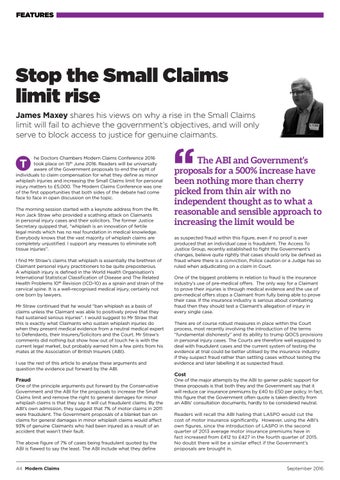 Stop the Small Claims limit rise James Maxey shares his views on why a rise in the Small Claims limit will fail to achieve the government’s objectives, and will only serve to block access to justice for genuine claimants. he Doctors Chambers Modern Claims Conference 2016 took place on 15th June 2016. Readers will be universally aware of the Government proposals to end the right of individuals to claim compensation for what they define as minor whiplash injuries and increasing the Small Claims limit for personal injury matters to £5,000. The Modern Claims Conference was one of the first opportunities that both sides of the debate had come face to face in open discussion on the topic.

The morning session started with a keynote address from the Rt. Hon Jack Straw who provided a scathing attack on Claimants in personal injury cases and their solicitors. The former Justice Secretary quipped that, “whiplash is an innovation of fertile legal minds which has no real foundation in medical knowledge. Everybody knows that the vast majority of whiplash claims are completely unjustified. I support any measures to eliminate soft tissue injuries”. I find Mr Straw’s claims that whiplash is essentially the brethren of Claimant personal injury practitioners to be quite preposterous. A whiplash injury is defined in the World Health Organisation’s International Statistical Classification of Disease and The Related Health Problems 10th Revision (ICD-10) as a sprain and strain of the cervical spine. It is a well-recognised medical injury, certainly not one born by lawyers. Mr Straw continued that he would “ban whiplash as a basis of claims unless the Claimant was able to positively prove that they had sustained serious injuries”. I would suggest to Mr Straw that this is exactly what Claimants who sustain whiplash injuries do when they present medical evidence from a neutral medical expert to Defendants, their Insurers/Solicitors and the Court. Mr Straw’s comments did nothing but show how out of touch he is with the current legal market, but probably earned him a few pints from his mates at the Association of British Insurers (ABI). I use the rest of this article to analyse these arguments and question the evidence put forward by the ABI.

One of the principle arguments put forward by the Conservative Government and the ABI for the proposals to increase the Small Claims limit and remove the right to general damages for minor whiplash claims is that they say it will cut fraudulent claims. By the ABI’s own admission, they suggest that 7% of motor claims in 2011 were fraudulent. The Government proposals of a blanket ban on claims for general damages in minor whiplash claims would affect 93% of genuine Claimants who had been injured as a result of an accident that wasn’t their fault. The above figure of 7% of cases being fraudulent quoted by the ABI is flawed to say the least. The ABI include what they define

The ABI and Government’s proposals for a 500% increase have been nothing more than cherry picked from thin air with no independent thought as to what a reasonable and sensible approach to increasing the limit would be as suspected fraud within this figure, even if no proof is ever produced that an individual case is fraudulent. The Access To Justice Group, recently established to fight the Government’s changes, believe quite rightly that cases should only be defined as fraud where there is a conviction, Police caution or a Judge has so ruled when adjudicating on a claim in Court. One of the biggest problems in relation to fraud is the insurance industry’s use of pre-medical offers. The only way for a Claimant to prove their injuries is through medical evidence and the use of pre-medical offers stops a Claimant from fully being able to prove their case. If the insurance industry is serious about combating fraud then they should test a Claimant’s allegation of injury in every single case. There are of course robust measures in place within the Court process, most recently involving the introduction of the terms “fundamental dishonesty” and its ability to trump QOCS provisions in personal injury cases. The Courts are therefore well equipped to deal with fraudulent cases and the current system of testing the evidence at trial could be better utilised by the insurance industry if they suspect fraud rather than settling cases without testing the evidence and later labelling it as suspected fraud.

One of the major attempts by the ABI to garner public support for these proposals is that both they and the Government say that it will reduce car insurance premiums by £40 to £50 per policy. In fact, this figure that the Government often quote is taken directly from an ABIs’ consultation documents, hardly to be considered neutral. Readers will recall the ABI hailing that LASPO would cut the cost of motor insurance significantly. However, using the ABI’s own figures, since the introduction of LASPO in the second quarter of 2013 average motor insurance premiums have in fact increased from £412 to £427 in the fourth quarter of 2015. No doubt there will be a similar effect if the Government’s proposals are brought in. Modern Claims Magazine reports, discusses and debates the changing and developing claims sector, using an editorial board of leading industr...

Modern Claims Magazine reports, discusses and debates the changing and developing claims sector, using an editorial board of leading industr...