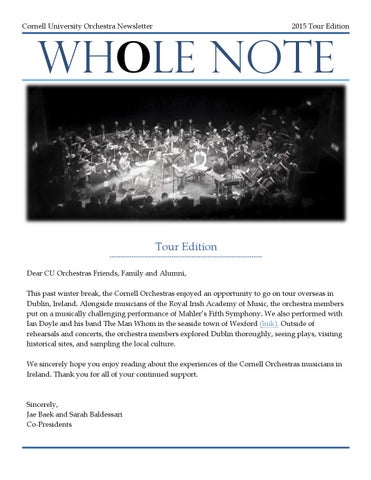 Tour Edition Dear CU Orchestras Friends, Family and Alumni, This past winter break, the Cornell Orchestras enjoyed an opportunity to go on tour overseas in Dublin, Ireland. Alongside musicians of the Royal Irish Academy of Music, the orchestra members put on a musically challenging performance of Mahlerâ&amp;#x20AC;&amp;#x2122;s Fifth Symphony. We also performed with Ian Doyle and his band The Man Whom in the seaside town of Wexford (link). Outside of rehearsals and concerts, the orchestra members explored Dublin thoroughly, seeing plays, visiting historical sites, and sampling the local culture. We sincerely hope you enjoy reading about the experiences of the Cornell Orchestras musicians in Ireland. Thank you for all of your continued support.

Reflections from Dublin The orchestra tour to Dublin has undoubtedly been one of the best experiences of my life. Prior to the tour, I had never been anywhere in Europe and being able to experience Dublin for the first time while bonding with fellow musicians made the trip even more exciting. Not only did I learn about Irish culture by experiencing its cuisine, museums, and beautiful architecture firsthand, but I also had the opportunity to perform with new musicians that exuded passion and enthusiasm with every note they played. In just one week, I felt I had grown musically and created new memories that would last a lifetime. And now, because of this tour, I am much closer to many of the members in our orchestra. The week we spent in Dublin has forever transformed my orchestral experience. -Mary Nattakom (Biology, Chemistry, ’17, violin)

This orchestra tour will undoubtedly be a trip that I will remember for the rest of my life. Even though Ireland’s climate wasn’t the ideal winter vacation weather, I am so glad that I got to travel to a country that I would have probably would not have gone out of my way to visit. I got to absorb a whole new culture with new and past acquaintances, and the experience brought us all closer together as a cohesive orchestra. They say that travel either creates rifts or brings people closer, and I’m so glad that it was the latter for the Cornell Orchestra. Regarding the musical part of this trip, I think that we faced a good number of challenges (e.g. learning new music, braving through the Mahler again) but we willingly took them on. It was incredibly inspiring to interact with such passionate conservatory students at RIAM, and the concert with Ian Doyle was so fun yet intimate. Overall, I couldn’t be more grateful to have been part of this experience, and I really hope future tours are as wonderful as this for future students. -Eunu Song (Economics, ‘17, violin)

Whole Note â&amp;#x20AC;&amp;#x201C; Tour 2015 The musical component of this trip was truly unique and wonderful. But for me personally, the most important moments of this trip were outside of St. Andrews Church, the Wexford Opera House and RIAM. The real magic of a trip like this happens on an early morning jog, or a late night walk, or a midday stroll. Having the opportunity to go somewhere new, meet new people, eat new foods and truly experience a culture is an amazing gift. So on that note, I would like to thank the RIAM students and The Man Whom for the music and the memories, but mostly Iâ&amp;#x20AC;&amp;#x2122;d like to thank the Orchestra for giving us the opportunity to experience something unique and wonderful. -Reade Otto-Moudry (Biology, &#39;17, horn)

As one of the few graduate students and as part of one of the smaller sections in the orchestra, before this tour I felt rather disconnected from the rest of the orchestra. Sharing the experience of touring in Ireland provided the extra bit of motivation to reach out to distant members of the orchestra and really get to know them on a personal (and musical) level. As a new member myself, I had no strong bonds with any particular group of people before the trip. This allowed me to pick different groups of people to join for each day of the tour; I made sure to meet at leastConsectetuer: one new person per day, although the average was far higher than this. Before traveling to Ireland with the CSO, I came to rehearsal to make music, and now I come to rehearsal to make music with friends. -Brian Schaefer (Physics, Ph.D candidate, clarinet)

Whole Note – Tour 2015 Since I came home from the CSO tour, all of my friends and family have been asking me the famous “How was the trip?” questions. And I keep responding with the same answer: “It was the best trip of my life.” It was such a unique experience and I don’t think I will ever get

another opportunity to travel to Ireland in the way that we did. Instead of participating in a typical tour of the country, Chris had allowed us to experience what it was like to be residents in the city of Dublin for a week. Outside of rehearsal, he gave us the chance to wander around the city on our own and see all of the sights. During rehearsal, we had the opportunity to collaborate with Irish students at the academy, which was a remarkable experience in itself. It gave us the chance to really connect with some of the people from the country, instead of just passing by them as a typical tourist would. The trip also brought the orchestra closer together as a group as well. Since we had to spend so much time together, we finally had a chance to talk and get to know one another outside of the 5 minute breaks we get at rehearsal. The love of music that we all share and the week we had all spent together has

4 caused me to make friends that I know I will have for years to come. -Emilie Camera (Engineering, ‘17, violin) This trip was about meeting people. When musicians bond, we make music with more feeling than just notes on a page. We learn how we play together and we are able to create one sound rather than dozens of individual notes. Not only did this trip offer the opportunity to see a cool new country but it allowed us time to meet new friends. We met new friends from our own ensemble and made new friends in Ireland. I feel like if I were in Dublin tomorrow, I could send a facebook message and have a lunch date in no time. Anybody can go on a trip abroad if they save their money but only a trip like this tour can offer that additional depth which keeps on giving long after returning to B20 of Lincoln Hall. -Nick Pino (Chemistry, ‘16, English horn)

After accompanying a band in concert and playing a hastily-rehearsed Villa-Lobos and Mahler in the coldest church I&#39;ve ever been in, I&#39;m beginning to wonder if there is anything this orchestra can&#39;t do. I feel extremely privileged to be in an orchestra where every player is so talented and passionate about music. I also feel very lucky to have met such incredible musicians as our RIAM friends, and to have had the chance to talk to and hear stories from Irish people--everyone I talked to was really friendly and helpful. And Dublin is such a beautiful city; it was such an experience to see buildings from medieval times, and go to museums, and listen to live music in pubs, and walk along the river at night. We didn&#39;t want to sleep in Ireland, we wanted to be out taking in the city, and drinking Irish beer, and sharing stories, talking, listening to music, playing games. It was a wonderfully fun week. Lastly, as a result of this tour, I can finally walk into rehearsal and say hello to people I hadn&#39;t talked to before. I think we&#39;ve all grown closer as an orchestra. -Colleen Weatherwax (Math, ‘16, viola)

5 One of the most interesting parts of this tour for me was playing with and getting to know the RIAM musicians. I learned all about the differences between musicians in Dublin and America-- how notes have different names, orchestras tune to a slightly different pitch, college students follow different degree programs-- but mostly I learned that sharing music is very much the same no matter where you are. It was wonderful to meet not only the Irish musicians but also other members of CSO. I’ve definitely grown much closer to the orchestra because of this trip, and I really appreciate the chance it gave me to experience another place while also sharing my love of music with a great group. -Emily Shertzer (Biology and Society, ‘16, oboe)

A Universal Language David Vakili What do you consume when you are tired – coffee? Tea? Red bull? For me, all I needed was a freshening shot of Gustav Mahler. The greatest lesson I learned while touring in Ireland was that music is a strange set of sound waves that has the ability to bring people together. And keep them awake. After a 35-hour day with only two hours of sleep, I arrived in Ireland with the Cornell Orchestras and began a fresh new day. Our bus came late and our schedule was so constrained we didn’t even have time to check in. It was off to rehearsal. When we arrived at the Royal Irish Academy of Music, I immediately felt alive again after playing Gustav Mahler’s Symphony No. 5. It was like I was home again except everything seemed smaller in Europe. Music has a way of creating intimacies. Everyone is sharing their deeply personal sounds that they have meticulously practiced alone in practice rooms.

6 This really helps make connections, as you’ve already exposed a big part of yourself. In Ireland, one of the ironies I found was that we communicated with music better than the way we communicated in English. For example, something funny would happen in the symphony and everyone would join in laughing. On the other hand, if I made a quick witty comment to my stand partner, the cultural differences and my ugly accent often went awry. In Ireland I enjoyed calling quarter notes crotchets and eighth notes quavers, something I can no longer do in New York. It is amazing how I’ve met people from Argentina, China, Germany, and Iran and they all call the standard musical beat a quarter note. And then you go to Ireland and they call it a crotchet. It was nice that most of our laughs and memories in Ireland came straight from the music. It made our connections much more heartfelt.

The Cornell Symphony Orchestra is one of the highest caliber musical groups on the Cornell campus. The group&#39;s members are drawn from all circles of Cornell life, including undergraduate students, graduate students, and members of the Ithaca community. Under the direction of Chris Younghoon Kim, the Cornell Symphony Orchestra continuously strives to present the best works of contemporary composers as well as compositions by established musical figures. 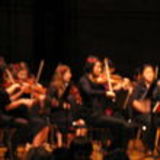