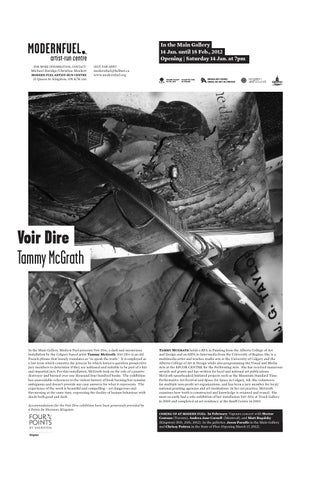 In the Main Gallery, Modern Fuel presents Voir Dire, a dark and mysterious installation by the Calgary-based artist Tammy McGrath. Voir Dire is an old French phrase that loosely translates as “to speak the truth.” It is employed as a law term which connotes the process by which lawyers question prospective jury members to determine if they are unbiased and suitable to be part of a fair and impartial jury. For this installation, McGrath took on the role of a passive destroyer and burned over one thousand four hundred books. The exhibition has unavoidable references to the violent history of book burning but remains ambiguous and doesn’t provide any easy answers for what it represents. The experience of the work is beautiful and compelling – yet dangerous and threatening at the same time, expressing the duality of human behaviour with deeds both good and dark. Accommodations for the Voir Dire exhibition have been generously provided by 4 Points by Sheraton, Kingston.

Tammy McGrath holds a BFA in Painting from the Alberta College of Art and Design and an MFA in Intermedia from the University of Regina. She is a multimedia artist and teaches studio arts at the University of Calgary and the Alberta College of Art & Design while also programming the Visual and Media Arts at the EPCOR CENTRE for the Performing Arts. She has received numerous awards and grants and has written for local and national art publications. McGrath spearheaded/initiated projects such as the Mountain Standard Time Performative Art Festival and Space for Space in Calgary, AB. She volunteers for multiple non-profit art organizations, and has been a jury member for local/ national granting agencies and art institutions. In her art practice, McGrath examines how truth is constructed and knowledge is retained and erased. She most recently had a solo exhibition of her installation Voir Dire at Truck Gallery in 2009 and completed an art residency at the Banff Centre in 2010. coming up at modern fuel:  In February: Vapours concert with Hector Centano (Toronto), Andrea Jane Cornell (Montreal), and Matt Rogalsky (Kingston) (Feb. 25th, 2012). In the galleries: Jason Paradis in the Main Gallery and Chrissy Poitras in the State of Flux (Opening March 17, 2012).

Down the Memory Hole essay by Robin McDonald

“Dort wo man Bücher verbrennt, verbrennt man auch am Ende Menschen.” (“Where they have burned books, they will end in burning human beings.”) –Heinrich Heine, Almansor: A Tragedy (1823)

Calgary-born multimedia artist Tammy McGrath is a bibliophile’s worst nightmare. Like lambs to the slaughter, nearly 1400 books were taken from their cozy shelves, lifted from coffee- and end-tables and other places of prestige, unpacked from cardboard yard-sale boxes that had been tucked away in garages for decades, and sacrificed to McGrath’s recent instillation, ‘Voir Dire’. Roughly translated from Old French into “to say what is true”, “Voir Dire” is used in contemporary Canadian and U.K. laws to mean “a trial within a trial”, the process of questioning a juror or witness in order to establish her as an expert of the evidence she presents to the court. With this title, McGrath probes contentious issues surrounding censorship and rights to the control of information. The books’ decaying corpses litter the perimeter of the gallery space, emitting the distinctive barbecued smell that one can conjure into the nostrils just by thinking about it. Two large, winged creatures patrol this literary cemetery, surveying the space and all who enter it like vultures eagerly awaiting their next meals. While a certain mythological creature has been rumored to arise from ashes, the menacing ebony birds, bats, reptiles, or some combination thereof, that hover low to the gallery floor bear no resemblances to the magnificent phoenix, with its gold plumage and its representation of new life in death. Instead, these creatures, ominously suspended from the gallery ceiling like gothic chandeliers, potentially exist as the only witnesses to this cataclysmic event aside from the artist herself, provoking the viewer to question, “who could have done such a thing?” and the ever-more-haunting, “why?” As explained in McGrath’s artist statement, “The viewer is never clear if the taloned beasts simply arrived too late – or if their sole purpose is to guard the truth of the destruction below them.” McGrath’s viewers feels compelled to place, displace, and re-place blame unto the creatures for the literary massacre. Though the space holds some clues to its intended purpose as a place for the exhibition of art (didactic panels, vinyl text, white-painted walls), the viewer enters the instillation and is immediately transported into a post-apocalyptic future. The obscured, destroyed, or otherwise rendered-unreadable texts do more than frustrate their potential readers; they assure these readers that the “future” they find themselves in is not one which can be easily reversed or escaped, for this is a time and place in which the right to speech, information, and other freedoms have become obsolete. Heinrich Heine’s aforementioned proverbial quotation, in which the German poet draws the parallel between book-burning and the burning of human beings, succinctly explains the symbolic element of book-burning as

representative of the eradication of an idea. Furthermore, Heine illuminates the dark and oppressive history of biblioclasm and its use by Fascist regimes as a tool for the censorship and command of thought and communication. Notable examples of this political history include the book-burning of China’s Qin Dynasty, led by Emperor Shih Huang Ti in 213 B.C., in which books were destroyed in an effort to re-construct history so that it began with the emperor’s reign. In this case, the desire to not only edit but to eradicate history was so intense that it led Emperor Shih Huang Ti to bury-alive scholars who voiced thoughts and theories oppositional to the falsified history. Another, more contemporary example is the Nazi regime’s burning of Jewish, leftist literature as a method of denouncing and exterminating the “degenerate” ideas articulated within. ‘Voir Dire’ symbolizes and conveys this larger dictatorial history, coercing its viewers out of their complacent positions and implicating them in active roles of resistance against future acts of censorship. The invention of the printing press in 1440 and the shift toward an industrial society increased the quantitative production of individual texts and thus removed most of the burden held by books in previous eras as the sole sources of the knowledge they kept. This period marked a serious cutting of ties with the tradition of oral story telling and the loss of the “aura” associated with quill-and-ink-written texts, as proposed by Walter Benjamin and defined by one’s proximity to an original work (of art, etc.). The twenty-first century introduction of entire digitized libraries challenged the relevance and necessity of a physical knowledge-keeping vessel and foreshadows the extinction of the material book object as demonstrated in ‘Voir Dire’. McGrath both laments this disappearance of the traditional medium, referring to her installation as reflective of the “violent cutting of ties to story, history, heritage and place”, and simultaneously urges her viewers to take stands against the censorship and control of artistic and intellectual creations before the post-apocalyptic future she has constructed for our viewing becomes a reality. Robin McDonald is a first year graduate student in the department of Art History at Queen’s University. Her research investigates the art museum’s role in the construction of discourses surrounding sexuality and queerness in art, and the queering of art historical canons.

In the State of Flux 14 Jan. to 18 Feb., 2012 Opening | Saturday 14 Jan. at 7pm Modern Fuel presents, in its State of Flux Gallery, a collection of zines, photographs and recordings by Tim Murphy (Kingston, ON) entitled Cheap, Fast, and Easy. As a writer, musician and photographer, Murphy takes his aesthetic and his inspiration from ‘zines such as BITCH NATION, a publication by Toronto artist/musician/film-maker GB Jones, or OUTPUNK and HOLY TITCLAMPS. A long-standing zinester, Murphy cribbed the cover of the first issue of his NOISE QUEEN from HOMOCORE TORONTO’s summer 1995 issue. Recently taking up photography as part of his practice, he aims to make pictures that look like what you used to get if you photocopied a snapshot on an early Xerox machine – murky black and white. tim murphy graduated from Queen’s University in 1989 with a BA in English, and thus became effectively unemployable. Based in Kingston, he has managed various menial tasks throughout the years that have enabled him to continue subverting the dominant paradigm in writing, music and, lately, photography. 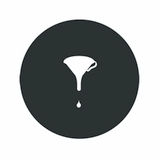