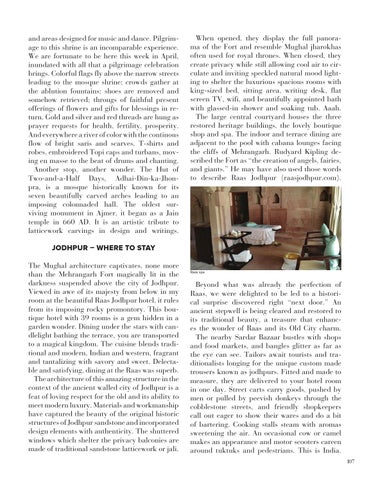 and areas designed for music and dance. Pilgrimage to this shrine is an incomparable experience. We are fortunate to be here this week in April, inundated with all that a pilgrimage celebration brings. Colorful flags fly above the narrow streets leading to the mosque shrine; crowds gather at the ablution fountains; shoes are removed and somehow retrieved; throngs of faithful present offerings of flowers and gifts for blessings in return. Gold and silver and red threads are hung as prayer requests for health, fertility, prosperity. And everywhere a river of color with the continous flow of bright saris and scarves, T-shirts and robes, embroidered Topi caps and turbans, moving en masse to the beat of drums and chanting. Another stop, another wonder. The Hut of Two-and-a-Half Days, Adhai-Din-ka-Jhonpra, is a mosque historically known for its seven beautifully carved arches leading to an imposing colonnaded hall. The oldest surviving monument in Ajmer, it began as a Jain temple in 660 AD. It is an artistic tribute to latticework carvings in design and writings.

When opened, they display the full panorama of the Fort and resemble Mughal jharokhas often used for royal thrones. When closed, they create privacy while still allowing cool air to circulate and inviting speckled natural mood lighting to shelter the luxurious spacious rooms with king-sized bed, sitting area, writing desk, flat screen TV, wifi, and beautifully appointed bath with glassed-in shower and soaking tub. Aaah. The large central courtyard houses the three restored heritage buildings, the lovely boutique shop and spa. The indoor and terrace dining are adjacent to the pool with cabana lounges facing the cliffs of Mehrangarh. Rudyard Kipling described the Fort as “the creation of angels, fairies, and giants.” He may have also used those words to describe Raas Jodhpur (raasjodhpur.com).

JODHPUR – WHERE TO STAY The Mughal architecture captivates, none more than the Mehrangarh Fort magically lit in the darkness suspended above the city of Jodhpur. Viewed in awe of its majesty from below in my room at the beautiful Raas Jodhpur hotel, it rules from its imposing rocky promontory. This boutique hotel with 39 rooms is a gem hidden in a garden wonder. Dining under the stars with candlelight bathing the terrace, you are transported to a magical kingdom. The cuisine blends traditional and modern, Indian and western, fragrant and tantalizing with savory and sweet. Delectable and satisfying, dining at the Raas was superb. The architecture of this amazing structure in the context of the ancient walled city of Jodhpur is a feat of loving respect for the old and its ability to meet modern luxury. Materials and workmanship have captured the beauty of the original historic structures of Jodhpur sandstone and incorporated design elements with authenticity. The shuttered windows which shelter the privacy balconies are made of traditional sandstone latticework or jali.

Beyond what was already the perfection of Raas, we were delighted to be led to a historical surprise discovered right “next door.” An ancient stepwell is being cleared and restored to its traditional beauty, a treasure that enhances the wonder of Raas and its Old City charm. The nearby Sardar Bazaar bustles with shops and food markets, and bangles glitter as far as the eye can see. Tailors await tourists and traditionalists longing for the unique custom made trousers known as jodhpurs. Fitted and made to measure, they are delivered to your hotel room in one day. Street carts carry goods, pushed by men or pulled by peevish donkeys through the cobblestone streets, and friendly shopkeepers call out eager to show their wares and do a bit of bartering. Cooking stalls steam with aromas sweetening the air. An occasional cow or camel makes an appearance and motor scooters careen around tuktuks and pedestrians. This is India. 107 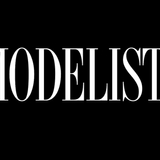 Modeliste Magazine is the essential backstage pass to fashion, beauty, travel, art & style. In collaboration with the industry's most renown...

Modeliste Magazine is the essential backstage pass to fashion, beauty, travel, art & style. In collaboration with the industry's most renown...