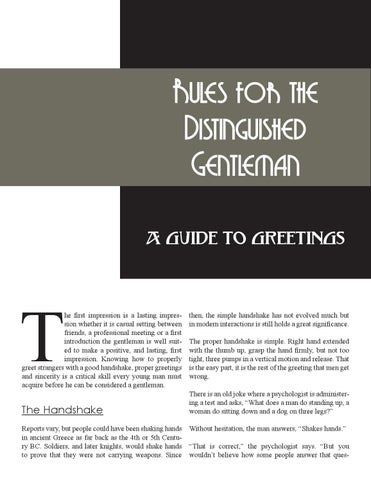 Rules for the Distinguished Gentleman A guide to Greetings

he first impression is a lasting impression whether it is casual setting between friends, a professional meeting or a first introduction the gentleman is well suited to make a positive, and lasting, first impression. Knowing how to properly greet strangers with a good handshake, proper greetings and sincerity is a critical skill every young man must acquire before he can be considered a gentleman.

then, the simple handshake has not evolved much but in modern interactions is still holds a great significance. The proper handshake is simple. Right hand extended with the thumb up, grasp the hand firmly, but not too tight, three pumps in a vertical motion and release. That is the easy part, it is the rest of the greeting that men get wrong. There is an old joke where a psychologist is administering a test and asks, “What does a man do standing up, a woman do sitting down and a dog on three legs?”

Reports vary, but people could have been shaking hands Without hesitation, the man answers, “Shakes hands.” in ancient Greece as far back as the 4th or 5th Century BC. Soldiers, and later knights, would shake hands “That is correct,” the psychologist says. “But you to prove that they were not carrying weapons. Since wouldn’t believe how some people answer that ques- 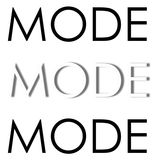