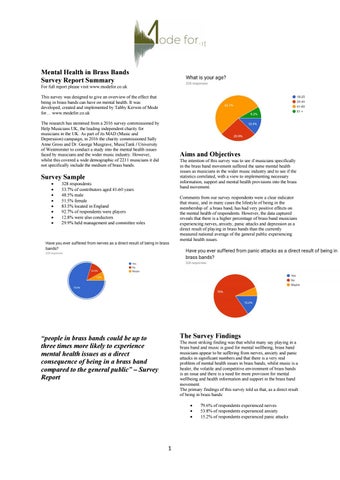 Mental Health in Brass Bands Survey Report Summary For full report please visit www.modefor.co.uk This survey was designed to give an overview of the effect that being in brass bands can have on mental health. It was developed, created and implemented by Tabby Kerwin of Mode for… www.modefor.co.uk The research has stemmed from a 2016 survey commissioned by Help Musicians UK, the leading independent charity for musicians in the UK. As part of its MAD (Music and Depression) campaign, in 2016 the charity commissioned Sally Anne Gross and Dr. George Musgrave, MusicTank / University of Westminster to conduct a study into the mental health issues faced by musicians and the wider music industry. However, whilst this covered a wide demographic of 2211 musicians it did not specifically include the medium of brass bands.

Aims and Objectives The intention of this survey was to see if musicians specifically in the brass band movement suffered the same mental health issues as musicians in the wider music industry and to see if the statistics correlated, with a view to implementing necessary information, support and mental health provisions into the brass band movement.

Comments from our survey respondents were a clear indicator that music, and in many cases the lifestyle of being in the membership of a brass band, has had very positive effects on the mental health of respondents. However, the data captured reveals that there is a higher percentage of brass band musicians experiencing nerves, anxiety, panic attacks and depression as a direct result of playing in brass bands than the currently measured national average of the general public experiencing mental health issues.

The most striking finding was that whilst many say playing in a brass band and music is good for mental wellbeing, brass band musicians appear to be suffering from nerves, anxiety and panic attacks in significant numbers and that there is a very real problem of mental health issues in brass bands, whilst music is a healer, the volatile and competitive environment of brass bands is an issue and there is a need for more provision for mental wellbeing and health information and support in the brass band movement. The primary findings of this survey told us that, as a direct result of being in brass bands:   

“I work professionally within the mental health sector and for many years have felt that as a movement, support should be available to players, particularly for those that play at the higher level.” – Survey Respondent

Demand for Changes Currently only 1.5% of the bands the respondents are in membership of have a mental health provision. There is therefore a need for an industry wide provision in the brass band movement. Based on the findings of this survey alone, the evidence presents a good case for changes to thinking and implementing provision for better knowledge, support and understanding of mental health specifically in the brass band movement.

Findings from the comments section of the survey made clear that whilst music itself and playing in brass bands has a calming and healing effect on respondents to this survey, the volatile and competitive nature of the movement has a detrimental effect on many, with the greatest anxieties coming from the contesting scene. 

62.2% of respondents to this survey experience nerves or anxiety on a contest stage

pressures on time, commitments and standards pressure of official management duties relationships with peers behaviour of conductors words and judgement of adjudicators words and judgement of press, peers and audience members travelling too far to band inter-band politics being sacked from a band anxiety from the day leading up to a contest having to play a solo pressure put on oneself ‘come down’ after a contest

Conclusions The survey was a vital first step in seeking to understand the current state of mental health in brass bands and the response and findings of the survey categorically show that mental health plays a part in brass bands; both mental ‘well’ and ‘ill’ health. Survey responses clearly show that there is a need to ask more questions and the initial response has been a positive one, as this is the first time this issue has been tackled in the brass band movement. Further research and study is needed via questioning, research and focus groups into particular case studies from youth to championship brass band level, so a range of solutions can be explored which can then be implemented for the benefit of individuals, organisations and the brass band movement as a whole.

There would be a benefit to looking deeper into the initial findings of this survey to further understand the status of mental health in the brass band movement. 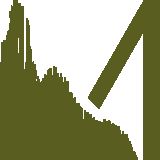 Summary of Findings and Conclusions from a Survey into the Current State of Mental Health in Brass Bands Designed and Conducted by Tabby Ke...

Summary of Findings and Conclusions from a Survey into the Current State of Mental Health in Brass Bands Designed and Conducted by Tabby Ke...