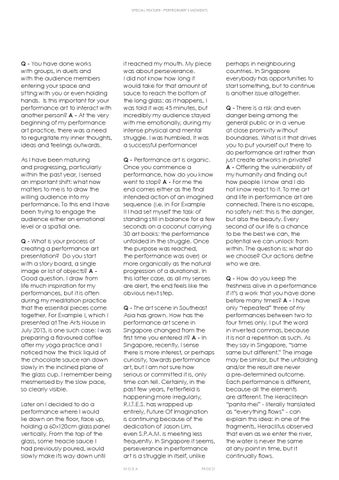 Q - You have done works with groups, in duets and with the audience members entering your space and sitting with you or even holding hands. Is this important for your performance art to interact with another person? A - At the very beginning of my performance art practice, there was a need to regurgitate my inner thoughts, ideas and feelings outwards.

it reached my mouth. My piece was about perseverance. I did not know how long it would take for that amount of sauce to reach the bottom of the long glass: as it happens, I was told it was 45 minutes, but incredibly my audience stayed with me emotionally, during my intense physical and mental struggle. I was humbled. It was a successful performance!

As I have been maturing and progressing, particularly within the past year, I sensed an important shift: what now matters to me is to draw the willing audience into my performance. To this end I have been trying to engage the audience either on emotional level or a spatial one.

Q - Performance art is organic. Once you commence a performance, how do you know went to stop? A - For me the end comes either as the final intended action of an imagined sequence (i.e. in For Example II I had set myself the task of standing still in balance for a few seconds on a coconut carrying 30 art books: the performance unfolded in the struggle. Once the purpose was reached, the performance was over) or more organically as the natural progression of a durational. In this latter case, as all my senses are alert, the end feels like the obvious next step.

Q - What is your process of creating a performance art presentation? Do you start with a story board, a single image or list of objects? A Good question. I draw from life much inspiration for my performances, but it is often during my meditation practice that the essential pieces come together. For Example I, which I presented at The Arts House in July 2013, is one such case: I was preparing a flavoured coffee after my yoga practice and I noticed how the thick liquid of the chocolate sauce ran down slowly in the inclined plane of the glass cup. I remember being mesmerised by the slow pace, so clearly visible. Later on I decided to do a performance where I would lie down on the floor, face up, holding a 60x120cm glass panel vertically. From the top of the glass, some treacle sauce I had previously poured, would slowly make its way down until

Q - The art scene in Southeast Asia has grown. How has the performance art scene in Singapore changed from the first time you entered it? A - In Singapore, recently, I sense there is more interest, or perhaps curiosity, towards performance art, but I am not sure how serious or committed it is, only time can tell. Certainly, in the past few years, Fetterfield is happening more irregularly, R.I.T.E.S. has wrapped up entirely, Future Of Imagination is continuing because of the dedication of Jason Lim, even S.P.A.M. is meeting less frequently. In Singapore it seems, perseverance in performance art is a struggle in itself, unlike M.O.D.A.

perhaps in neighbouring countries. In Singapore everybody has opportunities to start something, but to continue is another issue altogether. Q - There is a risk and even danger being among the general public or in a venue at close promixity without boundaries. What is it that drives you to put yourself out there to do performance art rather than just create artworks in private? A - Offering the vulnerability of my humanity and finding out how people I know and I do not know react to it. To me art and life in performance art are connected. There is no escape, no safety net: this is the danger, but also the beauty. Every second of our life is a chance to be the best we can, the potential we can unlock from within. The question is: what do we choose? Our actions define who we are. Q - How do you keep the freshness alive in a performance if it’s a work that you have done before many times? A - I have only “repeated” three of my performances between two to four times only. I put the word in inverted commas, because it is not a repetition as such. As they say in Singapore, “same same but different.” The image may be similar, but the unfolding and/or the result are never a pre-determined outcome. Each performance is different, because all the elements are different. The Heraclitean “panta rhei” - literally translated as “everything flows” - can explain this idea: in one of the fragments, Heraclitus observed that even as we enter the river, the water is never the same at any point in time, but it continually flows. 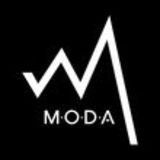 M.O.D.A. is an e-magazine dedicated to the discovery of edgy, emerging artists in the fashion, arts and design industries; Singapore and aro...

M.O.D.A. is an e-magazine dedicated to the discovery of edgy, emerging artists in the fashion, arts and design industries; Singapore and aro...