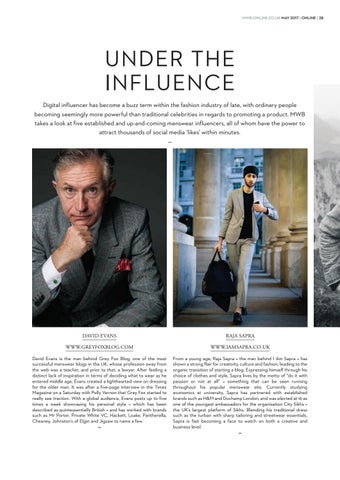 UNDER THE INFLUENCE Digital influencer has become a buzz term within the fashion industry of late, with ordinary people becoming seemingly more powerful than traditional celebrities in regards to promoting a product. MWB takes a look at five established and up-and-coming menswear influencers, all of whom have the power to attract thousands of social media ‘likes’ within minutes. —

David Evans is the man behind Grey Fox Blog, one of the most successful menswear blogs in the UK, whose profession away from the web was a teacher, and prior to that, a lawyer. After feeling a distinct lack of inspiration in terms of deciding what to wear as he entered middle age, Evans created a lighthearted view on dressing for the older man. It was after a five-page interview in the Times Magazine on a Saturday with Polly Vernon that Grey Fox started to really see traction. With a global audience, Evans posts up to five times a week showcasing his personal style – which has been described as quintessentially British – and has worked with brands such as Mr Porter, Private White VC, Hackett, Loake, Pantherella, Cheaney, Johnston’s of Elgin and Jigsaw to name a few. —

From a young age, Raja Sapra – the man behind I Am Sapra – has shown a strong flair for creativity, culture and fashion, leading to the organic transition of starting a blog. Expressing himself through his choice of clothes and style, Sapra lives by the motto of “do it with passion or not at all” – something that can be seen running throughout his popular menswear site. Currently studying economics at university, Sapra has partnered with established brands such as H&M and Duchamp London, and was elected at 16 as one of the youngest ambassadors for the organisation City Sikhs – the UK’s largest platform of Sikhs. Blending his traditional dress such as the turban with sharp tailoring and streetwear essentials, Sapra is fast becoming a face to watch on both a creative and business level. —