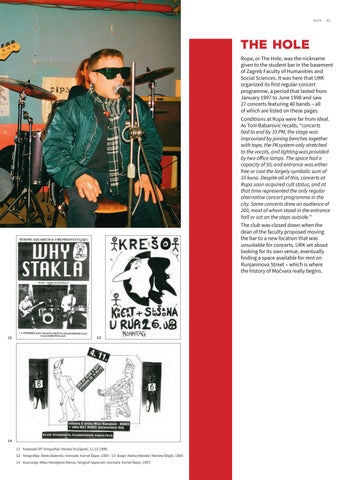 THE HOLE Rupa, or The Hole, was the nickname given to the student bar in the basement of Zagreb Faculty of Humanities and Social Sciences. It was here that URK organized its first regular concert programme, a period that lasted from January 1997 to June 1998 and saw 27 concerts featuring 40 bands – all of which are listed on these pages. Conditions at Rupa were far from ideal. As Toni Babarović recalls, “concerts had to end by 10 PM, the stage was improvised by joining benches together with tape, the PA system only stretched to the vocals, and lighting was provided by two office lamps. The space had a capacity of 50, and entrance was either free or cost the largely symbolic sum of 10 kuna. Despite all of this, concerts at Rupa soon acquired cult status, and at that time represented the only regular alternative concert programme in the city. Some concerts drew an audience of 200, most of whom stood in the entrance hall or sat on the steps outside.” The club was closed down when the dean of the faculty proposed moving the bar to a new location that was unsuitable for concerts. URK set about looking for its own venue, eventually finding a space available for rent on Runjaninova Street – which is where the history of Močvara really begins.