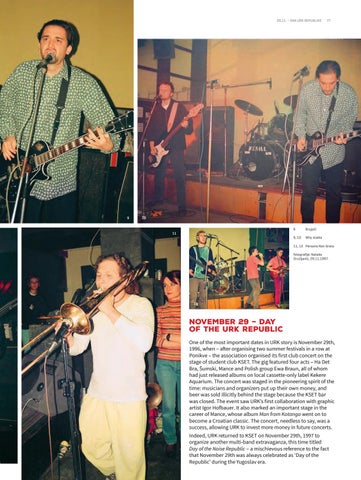 NOVEMBER 29 – DAY OF THE URK REPUBLIC One of the most important dates in URK story is November 29th, 1996, when – after organising two summer festivals in a row at Ponikve – the association organised its first club concert on the stage of student club KSET. The gig featured four acts – Ha Det Bra, Šumski, Mance and Polish group Ewa Braun, all of whom had just released albums on local cassette-only label Kekere Aquarium. The concert was staged in the pioneering spirit of the time: musicians and organizers put up their own money, and beer was sold illicitly behind the stage because the KSET bar was closed. The event saw URK’s first collaboration with graphic artist Igor Hofbauer. It also marked an important stage in the career of Mance, whose album Man from Katanga went on to become a Croatian classic. The concert, needless to say, was a success, allowing URK to invest more money in future concerts. Indeed, URK returned to KSET on November 29th, 1997 to organize another multi-band extravaganza, this time titled Day of the Noise Republic – a mischievous reference to the fact that November 29th was always celebrated as ‘Day of the Republic’ during the Yugoslav era.