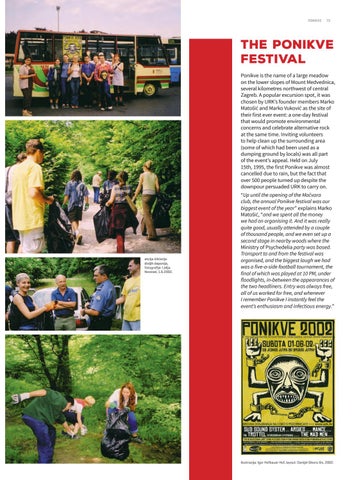 THE PONIKVE FESTIVAL Ponikve is the name of a large meadow on the lower slopes of Mount Medvednica, several kilometres northwest of central Zagreb. A popular excursion spot, it was chosen by URK’s founder members Marko Matošić and Marko Vuković as the site of their first ever event: a one-day festival that would promote environmental concerns and celebrate alternative rock at the same time. Inviting volunteers to help clean up the surrounding area (some of which had been used as a dumping ground by locals) was all part of the event’s appeal. Held on July 15th, 1995, the first Ponikve was almost cancelled due to rain, but the fact that over 500 people turned up despite the downpour persuaded URK to carry on.

“Up until the opening of the Močvara club, the annual Ponikve festival was our biggest event of the year” explains Marko Matošić, “and we spent all the money we had on organising it. And it was really quite good, usually attended by a couple of thousand people, and we even set up a second stage in nearby woods where the Ministry of Psychedelia party was based. Transport to and from the festival was organised, and the biggest laugh we had was a five-a-side football tournament, the final of which was played at 10 PM, under floodlights, in-between the appearances of the two headliners. Entry was always free, all of us worked for free, and whenever I remember Ponikve I instantly feel the event’s enthusiasm and infectious energy.”