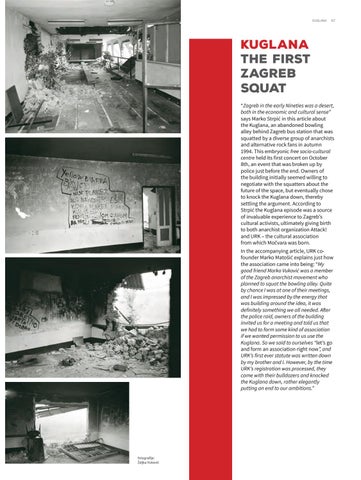 KUGLANA  THE FIRST ZAGREB SQUAT “Zagreb in the early Nineties was a desert, both in the economic and cultural sense” says Marko Strpić in this article about the Kuglana, an abandoned bowling alley behind Zagreb bus station that was squatted by a diverse group of anarchists and alternative rock fans in autumn 1994. This embryonic free socio-cultural centre held its first concert on October 8th, an event that was broken up by police just before the end. Owners of the building initially seemed willing to negotiate with the squatters about the future of the space, but eventually chose to knock the Kuglana down, thereby settling the argument. According to Strpić the Kuglana episode was a source of invaluable experience to Zagreb’s cultural activists, ultimately giving birth to both anarchist organization Attack! and URK – the cultural association from which Močvara was born. In the accompanying article, URK cofounder Marko Matošić explains just how the association came into being: “My good friend Marko Vuković was a member of the Zagreb anarchist movement who planned to squat the bowling alley. Quite by chance I was at one of their meetings, and I was impressed by the energy that was building around the idea, it was definitely something we all needed. After the police raid, owners of the building invited us for a meeting and told us that we had to form some kind of association if we wanted permission to us use the Kuglana. So we said to ourselves “let’s go and form an association right now”, and URK’s first ever statute was written down by my brother and I. However, by the time URK’s registration was processed, they came with their bulldozers and knocked the Kuglana down, rather elegantly putting an end to our ambitions.”