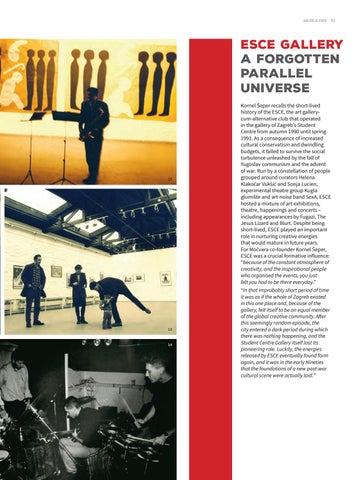 Kornel Šeper recalls the short-lived history of the ESCE, the art gallerycum-alternative club that operated in the gallery of Zagreb’s Student Centre from autumn 1990 until spring 1991. As a consequence of increased cultural conservatism and dwindling budgets, it failed to survive the social turbulence unleashed by the fall of Yugoslav communism and the advent of war. Run by a constellation of people grouped around curators Helena Klakočar Vukšić and Sonja Lucien, experimental theatre group Kugla glumište and art-noise band SexA, ESCE hosted a mixture of art exhibitions, theatre, happenings and concerts – including appearances by Fugazi, The Jesus Lizard and Blurt. Despite being short-lived, ESCE played an important role in nurturing creative energies that would mature in future years. For Močvara co-founder Kornel Šeper, ESCE was a crucial formative influence: “because of the constant atmosphere of creativity, and the inspirational people who organised the events, you just felt you had to be there everyday.” “In that improbably short period of time it was as if the whole of Zagreb existed in this one place and, because of the gallery, felt itself to be an equal member of the global creative community. After this seemingly random episode, the city entered a dark period during which there was nothing happening, and the Student Centre Gallery itself lost its pioneering role. Luckily, the energies released by ESCE eventually found form again, and it was in the early Nineties that the foundations of a new post-war cultural scene were actually laid.”