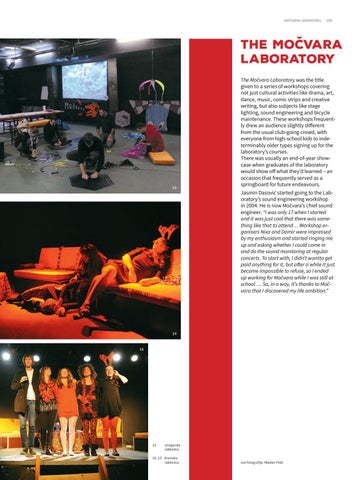 The Močvara Laboratory was the title given to a series of workshops covering not just cultural activities like drama, art, dance, music, comic strips and creative writing, but also subjects like stage lighting, sound engineering and bicycle maintenance. These workshops frequently drew an audience slightly different from the usual club-going crowd, with everyone from high-school kids to indeterminably older types signing up for the laboratory’s courses. There was usually an end-of-year showcase when graduates of the laboratory would show off what they’d learned – an occasion that frequently served as a springboard for future endeavours. Jasmin Dasović started going to the Laboratory’s sound engineering workshop in 2004. He is now Močvara’s chief sound engineer. “I was only 17 when I started and it was just cool that there was something like that to attend… Workshop organisers Nixa and Damir were impressed by my enthusiasm and started ringing me up and asking whether I could come in and do the sound monitoring at regular concerts. To start with, I didn’t wantto get paid anything for it, but after a while it just became impossible to refuse, so I ended up working for Močvara while I was still at school…. So, in a way, it’s thanks to Močvara that I discovered my life ambition.”