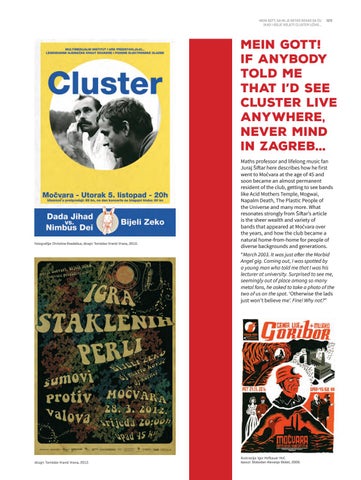 MEIN GOTT! IF ANYBODY TOLD ME THAT I’D SEE CLUSTER LIVE ANYWHERE, NEVER MIND IN ZAGREB...

Maths professor and lifelong music fan Juraj Šiftar here describes how he first went to Močvara at the age of 45 and soon became an almost permanent resident of the club, getting to see bands like Acid Mothers Temple, Mogwai, Napalm Death, The Plastic People of the Universe and many more. What resonates strongly from Šiftar’s article is the sheer wealth and variety of bands that appeared at Močvara over the years, and how the club became a natural home-from-home for people of diverse backgrounds and generations. “March 2003. It was just after the Morbid Angel gig. Coming out, I was spotted by a young man who told me that I was his lecturer at university. Surprised to see me, seemingly out of place among so many metal fans, he asked to take a photo of the two of us on the spot. ‘Otherwise the lads just won’t believe me’. Fine! Why not?”