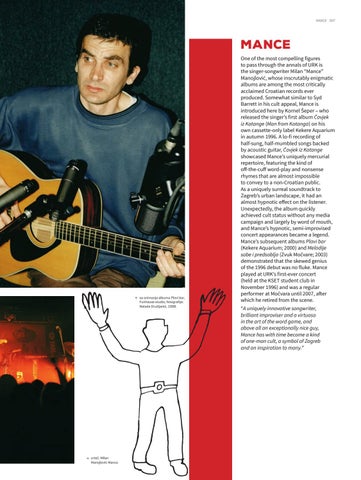 One of the most compelling figures to pass through the annals of URK is the singer-songwriter Milan “Mance” Manojlović, whose inscrutably enigmatic albums are among the most critically acclaimed Croatian records ever produced. Somewhat similar to Syd Barrett in his cult appeal, Mance is introduced here by Kornel Šeper – who released the singer’s first album Čovjek iz Katange (Man from Katanga) on his own cassette-only label Kekere Aquarium in autumn 1996. A lo-fi recording of half-sung, half-mumbled songs backed by acoustic guitar, Čovjek iz Katange showcased Mance’s uniquely mercurial repertoire, featuring the kind of off-the-cuff word-play and nonsense rhymes that are almost impossible to convey to a non-Croatian public. As a uniquely surreal soundtrack to Zagreb’s urban landscape, it had an almost hypnotic effect on the listener. Unexpectedly, the album quickly achieved cult status without any media campaign and largely by word of mouth, and Mance’s hypnotic, semi-improvised concert appearances became a legend. Mance’s subsequent albums Plavi bar (Kekere Aquarium; 2000) and Melodije sobe i predsoblja (Zvuk Močvare; 2003) demonstrated that the skewed genius of the 1996 debut was no fluke. Mance played at URK’s first-ever concert (held at the KSET student club in November 1996) and was a regular performer at Močvara until 2007, after which he retired from the scene. “A uniquely innovative songwriter, brilliant improviser and a virtuoso in the art of the word game, and above all an exceptionally nice guy, Mance has with time become a kind of one-man cult, a symbol of Zagreb and an inspiration to many.”