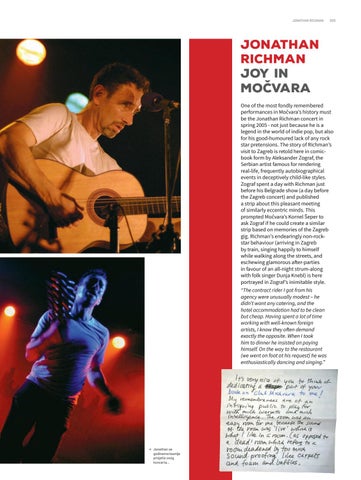 JONATHAN RICHMAN JOY IN MOČVARA One of the most fondly remembered performances in Močvara’s history must be the Jonathan Richman concert in spring 2005 - not just because he is a legend in the world of indie pop, but also for his good-humoured lack of any rock star pretensions. The story of Richman’s visit to Zagreb is retold here in comicbook form by Aleksander Zograf, the Serbian artist famous for rendering real-life, frequently autobiographical events in deceptively child-like styles. Zograf spent a day with Richman just before his Belgrade show (a day before the Zagreb concert) and published a strip about this pleasant meeting of similarly eccentric minds. This prompted Močvara’s Kornel Šeper to ask Zograf if he could create a similar strip based on memories of the Zagreb gig. Richman’s endearingly non-rockstar behaviour (arriving in Zagreb by train, singing happily to himself while walking along the streets, and eschewing glamorous after-parties in favour of an all-night strum-along with folk singer Dunja Knebl) is here portrayed in Zograf’s inimitable style. “The contract rider I got from his agency were unusually modest – he didn’t want any catering, and the hotel accommodation had to be clean but cheap. Having spent a lot of time working with well-known foreign artists, I know they often demand exactly the opposite. When I took him to dinner he insisted on paying himself. On the way to the restaurant (we went on foot at his request) he was enthusiastically dancing and singing.”