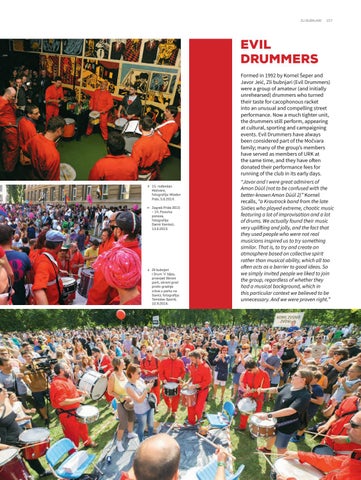 EVIL DRUMMERS Formed in 1992 by Kornel Šeper and Javor Jeić, Zli bubnjari (Evil Drummers) were a group of amateur (and initially unrehearsed) drummers who turned their taste for cacophonous racket into an unusual and compelling street performance. Now a much tighter unit, the drummers still perform, appearing at cultural, sporting and campaigning events. Evil Drummers have always been considered part of the Močvara family; many of the group’s members have served as members of URK at the same time, and they have often donated their performance fees for running of the club in its early days. ↑ 15. rođendan Močvare, fotografija: Mladen Pobi, 5.6.2014. ← Zagreb Pride 2015 - 14. Povorka ponosa, fotografija: Damir Kantoci, 13.6.2015

“Javor and I were great admirers of Amon Düül (not to be confused with the better-known Amon Düül 2)” Kornel recalls, “a Krautrock band from the late Sixties who played extreme, chaotic music featuring a lot of improvisation and a lot of drums. We actually found their music very uplifting and jolly, and the fact that they used people who were not real musicians inspired us to try something similar. That is, to try and create an atmosphere based on collective spirit rather than musical ability, which all too often acts as a barrier to good ideas. So we simply invited people we liked to join the group, regardless of whether they had a musical background, which in this particular context we believed to be unnecessary. And we were proven right.”