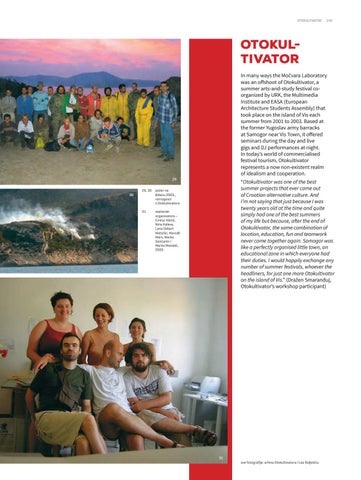 OTOKULTIVATOR In many ways the Močvara Laboratory was an offshoot of Otokultivator, a summer arts-and-study festival coorganized by URK, the Multimedia Institute and EASA (European Architecture Students Assembly) that took place on the island of Vis each summer from 2001 to 2003. Based at the former Yugoslav army barracks at Samogor near Vis Town, it offered seminars during the day and live gigs and DJ performances at night. In today’s world of commercialised festival tourism, Otokultivator represents a now non-existent realm of idealism and cooperation.

“Otokultivator was one of the best summer projects that ever came out of Croatian alternative culture. And I’m not saying that just because I was twenty years old at the time and quite simply had one of the best summers of my life but because, after the end of Otokultivator, the same combination of location, education, fun and teamwork never came together again. Samogor was like a perfectly organised little town, an educational zone in which everyone had their duties. I would happily exchange any number of summer festivals, whoever the headliners, for just one more Otokultivator on the island of Vis.” (Dražen Smaranduj, Otokultivator’s workshop participant)