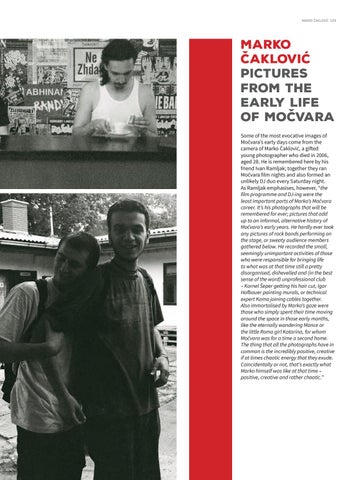 MARKO ČAKLOVIĆ PICTURES FROM THE EARLY LIFE OF MOČVARA Some of the most evocative images of Močvara’s early days come from the camera of Marko Čaklović, a gifted young photographer who died in 2006, aged 28. He is remembered here by his friend Ivan Ramljak; together they ran Močvara film nights and also formed an unlikely DJ duo every Saturday night. As Ramljak emphasises, however, “the film programme and DJ-ing were the least important parts of Marko’s Močvara career. It’s his photographs that will be remembered for ever; pictures that add up to an informal, alternative history of Močvara’s early years. He hardly ever took any pictures of rock bands performing on the stage, or sweaty audience members gathered below. He recorded the small, seemingly unimportant activities of those who were responsible for bringing life to what was at that time still a pretty disorganised, dishevelled and (in the best sense of the word) unprofessional club – Kornel Šeper getting his hair cut, Igor Hofbauer painting murals, or technical expert Kama joining cables together. Also immortalised by Marko’s gaze were those who simply spent their time moving around the space in those early months, like the eternally wandering Mance or the little Roma girl Katarina, for whom Močvara was for a time a second home. The thing that all the photographs have in common is the incredibly positive, creative if at times chaotic energy that they exude. Coincidentally or not, that’s exactly what Marko himself was like at that time – positive, creative and rather chaotic.”