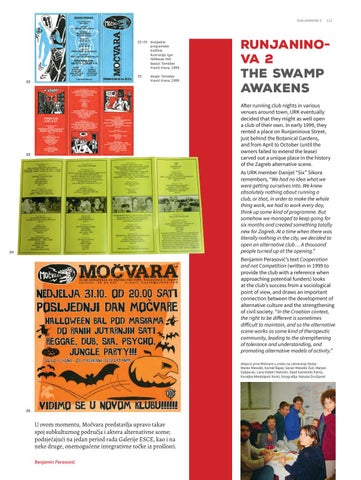 RUNJANINOVA 2 THE SWAMP AWAKENS After running club nights in various venues around town, URK eventually decided that they might as well open a club of their own. In early 1999, they rented a place on Runjaninova Street, just behind the Botanical Gardens, and from April to October (until the owners failed to extend the lease) carved out a unique place in the history of the Zagreb alternative scene.

As URK member Danijel “Six” Sikora remembers, “We had no idea what we were getting ourselves into. We knew absolutely nothing about running a club, or that, in order to make the whole thing work, we had to work every day, think up some kind of programme. But somehow we managed to keep going for six months and created something totally new for Zagreb. At a time when there was literally nothing in the city, we decided to open an alternative club… A thousand people turned up at the opening.”

Benjamin Perasović’s text Cooperation and not Competition (written in 1999 to provide the club with a reference when approaching potential funders) looks at the club’s success from a sociological point of view, and draws an important connection between the development of alternative culture and the strengthening of civil society. “In the Croatian context, the right to be different is sometimes difficult to maintain, and so the alternative scene works as some kind of therapeutic community, leading to the strengthening of tolerance and understanding, and promoting alternative models of activity.” ekipa iz prve Močvare u uredu na zatvaranju kluba: Marko Matošić, Kornel Šeper, Goran Matošić Žuti, Marjan Gašparac, Lana Gebert Matošić, Sead Kamenčić Kama, Koraljka Mindoljević Korki, fotografija: Nataša Družijanić