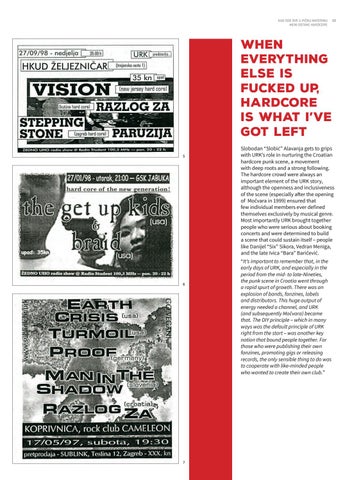 WHEN EVERYTHING ELSE IS FUCKED UP, HARDCORE IS WHAT I’VE GOT LEFT 5

Slobodan “Slobić” Alavanja gets to grips with URK’s role in nurturing the Croatian hardcore punk scene, a movement with deep roots and a strong following. The hardcore crowd were always an important element of the URK story, although the openness and inclusiveness of the scene (especially after the opening of Močvara in 1999) ensured that few individual members ever defined themselves exclusively by musical genre. Most importantly URK brought together people who were serious about booking concerts and were determined to build a scene that could sustain itself – people like Danijel “Six” Sikora, Vedran Meniga, and the late Ivica “Bara” Baričević. “It’s important to remember that, in the early days of URK, and especially in the period from the mid- to late-Nineties, the punk scene in Croatia went through a rapid spurt of growth. There was an explosion of bands, fanzines, labels and distributors. This huge output of energy needed a channel, and URK (and subsequently Močvara) became that. The DIY principle – which in many ways was the default principle of URK right from the start – was another key notion that bound people together. For those who were publishing their own fanzines, promoting gigs or releasing records, the only sensible thing to do was to cooperate with like-minded people who wanted to create their own club.”