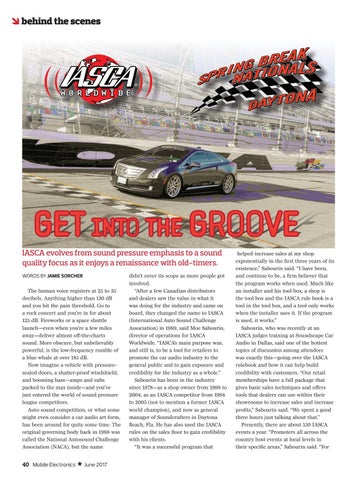 IASCA evolves from sound pressure emphasis to a sound quality focus as it enjoys a renaissance with old-timers. WORDS BY JAMIE SORCHER

The human voice registers at 25 to 35 decibels. Anything higher than 130 dB and you hit the pain threshold. Go to a rock concert and you’re in for about 125 dB. Fireworks or a space shuttle launch—even when you’re a few miles away—deliver almost off-the-charts sound. More obscure, but unbelievably powerful, is the low-frequency rumble of a blue whale at over 185 dB. Now imagine a vehicle with pressuresealed doors, a shatter-proof windshield, and booming bass—amps and subs packed to the max inside—and you’ve just entered the world of sound pressure league competitors. Auto sound competition, or what some might even consider a car audio art form, has been around for quite some time. The original governing body back in 1988 was called the National Autosound Challenge Association (NACA), but the name

didn’t cover its scope as more people got involved. “After a few Canadian distributors and dealers saw the value in what it was doing for the industry and came on board, they changed the name to IASCA (International Auto Sound Challenge Association) in 1989, said Moe Sabourin, director of operations for IASCA Worldwide. “IASCA’s main purpose was, and still is, to be a tool for retailers to promote the car audio industry to the general public and to gain exposure and credibility for the industry as a whole.” Sabourin has been in the industry since 1978—as a shop owner from 1998 to 2004, as an IASCA competitor from 1994 to 2005 (not to mention a former IASCA world champion), and now as general manager of Soundcrafters in Daytona Beach, Fla. He has also used the IASCA rules on the sales floor to gain credibility with his clients. “It was a successful program that

helped increase sales at my shop exponentially in the first three years of its existence,” Sabourin said. “I have been, and continue to be, a firm believer that the program works when used. Much like an installer and his tool box, a shop is the tool box and the IASCA rule book is a tool in the tool box, and a tool only works when the installer uses it. If the program is used, it works.” Sabourin, who was recently at an IASCA judges training at Soundscape Car Audio in Dallas, said one of the hottest topics of discussion among attendees was exactly this—going over the IASCA rulebook and how it can help build credibility with customers. “Our retail memberships have a full package that gives basic sales techniques and offers tools that dealers can use within their showrooms to increase sales and increase profits,” Sabourin said. “We spent a good three hours just talking about that.” Presently, there are about 150 IASCA events a year. “Promoters all across the country host events at local levels in their specific areas,” Sabourin said. “For

Announcing the Top 50 Retailers & Installers for 2017