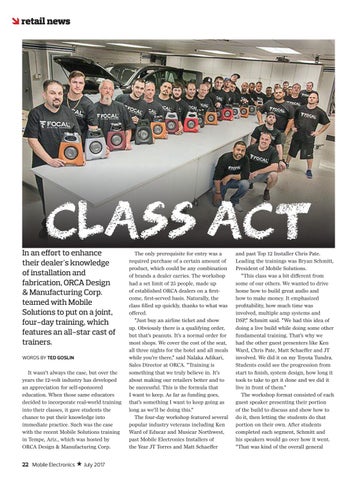 In an effort to enhance their dealer&#39;s knowledge of installation and fabrication, ORCA Design &amp; Manufacturing Corp. teamed with Mobile Solutions to put on a joint, four-day training, which features an all-star cast of trainers. WORDS BY TED GOSLIN

It wasn&#39;t always the case, but over the years the 12-volt industry has developed an appreciation for self-sponsored education. When those same educators decided to incorporate real-world training into their classes, it gave students the chance to put their knowledge into immediate practice. Such was the case with the recent Mobile Solutions training in Tempe, Ariz., which was hosted by ORCA Design &amp; Manufacturing Corp.

The only prerequisite for entry was a required purchase of a certain amount of product, which could be any combination of brands a dealer carries. The workshop had a set limit of 25 people, made up of established ORCA dealers on a firstcome, first-served basis. Naturally, the class filled up quickly, thanks to what was offered. &quot;Just buy an airline ticket and show up. Obviously there is a qualifying order, but that&#39;s peanuts. It&#39;s a normal order for most shops. We cover the cost of the seat, all three nights for the hotel and all meals while you&#39;re there,&quot; said Nalaka Adikari, Sales Director at ORCA. &quot;Training is something that we truly believe in. It&#39;s about making our retailers better and to be successful. This is the formula that I want to keep. As far as funding goes, that&#39;s something I want to keep going as long as we&#39;ll be doing this.&quot; The four-day workshop featured several popular industry veterans including Ken Ward of Educar and Musicar Northwest, past Mobile Electronics Installers of the Year JT Torres and Matt Schaeffer

and past Top 12 Installer Chris Pate. Leading the trainings was Bryan Schmitt, President of Mobile Solutions. &quot;This class was a bit different from some of our others. We wanted to drive home how to build great audio and how to make money. It emphasized profitability, how much time was involved, multiple amp systems and DSP,&quot; Schmitt said. &quot;We had this idea of doing a live build while doing some other fundamental training. That&#39;s why we had the other guest presenters like Ken Ward, Chris Pate, Matt Schaeffer and JT involved. We did it on my Toyota Tundra. Students could see the progression from start to finish, system design, how long it took to take to get it done and we did it live in front of them.&quot; The workshop format consisted of each guest speaker presenting their portion of the build to discuss and show how to do it, then letting the students do that portion on their own. After students completed each segment, Schmitt and his speakers would go over how it went. &quot;That was kind of the overall general