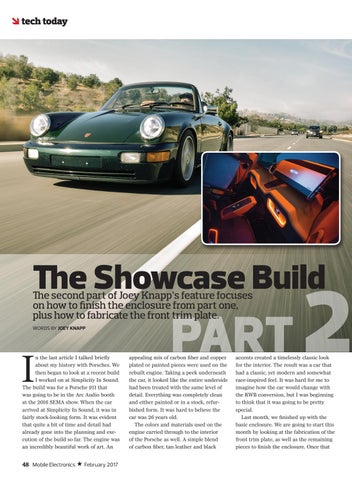 The Showcase Build The second part of Joey Knapp’s feature focuses on how to finish the enclosure from part one, plus how to fabricate the front trim plate. WORDS BY JOEY KNAPP

n the last article I talked briefly about my history with Porsches. We then began to look at a recent build I worked on at Simplicity In Sound. The build was for a Porsche 911 that was going to be in the Arc Audio booth at the 2016 SEMA show. When the car arrived at Simplicity In Sound, it was in fairly stock-looking form. It was evident that quite a bit of time and detail had already gone into the planning and execution of the build so far. The engine was an incredibly beautiful work of art. An

appealing mix of carbon fiber and copper plated or painted pieces were used on the rebuilt engine. Taking a peek underneath the car, it looked like the entire underside had been treated with the same level of detail. Everything was completely clean and either painted or in a stock, refurbished form. It was hard to believe the car was 26 years old. The colors and materials used on the engine carried through to the interior of the Porsche as well. A simple blend of carbon fiber, tan leather and black

accents created a timelessly classic look for the interior. The result was a car that had a classic, yet modern and somewhat race-inspired feel. It was hard for me to imagine how the car would change with the RWB conversion, but I was beginning to think that it was going to be pretty special. Last month, we finished up with the basic enclosure. We are going to start this month by looking at the fabrication of the front trim plate, as well as the remaining pieces to finish the enclosure. Once that