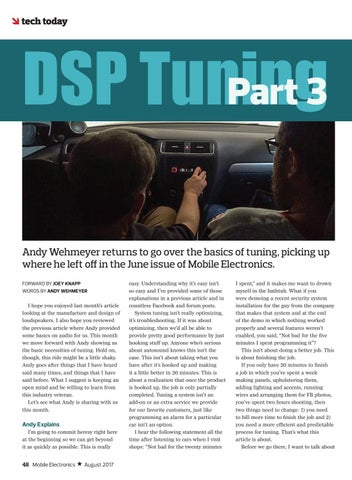 DSP Tuning Andy Wehmeyer returns to go over the basics of tuning, picking up where he left off in the June issue of Mobile Electronics. FORWARD BY JOEY KNAPP WORDS BY ANDY WEHMEYER

I hope you enjoyed last month’s article looking at the manufacture and design of loudspeakers. I also hope you reviewed the previous article where Andy provided some basics on audio for us. This month we move forward with Andy showing us the basic necessities of tuning. Hold on, though, this ride might be a little shaky. Andy goes after things that I have heard said many times, and things that I have said before. What I suggest is keeping an open mind and be willing to learn from this industry veteran. Let’s see what Andy is sharing with us this month.

Andy Explains I’m going to commit heresy right here at the beginning so we can get beyond it as quickly as possible. This is really

easy. Understanding why it’s easy isn’t so easy and I’ve provided some of those explanations in a previous article and in countless Facebook and forum posts. System tuning isn’t really optimizing, it’s troubleshooting. If it was about optimizing, then we’d all be able to provide pretty good performance by just hooking stuff up. Anyone who’s serious about autosound knows this isn’t the case. This isn’t about taking what you have after it’s hooked up and making it a little better in 20 minutes. This is about a realization that once the product is hooked up, the job is only partially completed. Tuning a system isn’t an add-on or an extra service we provide for our favorite customers, just like programming an alarm for a particular car isn’t an option. I hear the following statement all the time after listening to cars when I visit shops: “Not bad for the twenty minutes

I spent,” and it makes me want to drown myself in the bathtub. What if you were demoing a recent security system installation for the guy from the company that makes that system and at the end of the demo in which nothing worked properly and several features weren’t enabled, you said, “Not bad for the five minutes I spent programming it”? This isn’t about doing a better job. This is about finishing the job. If you only have 20 minutes to finish a job in which you’ve spent a week making panels, upholstering them, adding lighting and accents, running wires and arranging them for FB photos, you’ve spent two hours shooting, then two things need to change: 1) you need to bill more time to finish the job and 2) you need a more efficient and predictable process for tuning. That’s what this article is about. Before we go there, I want to talk about