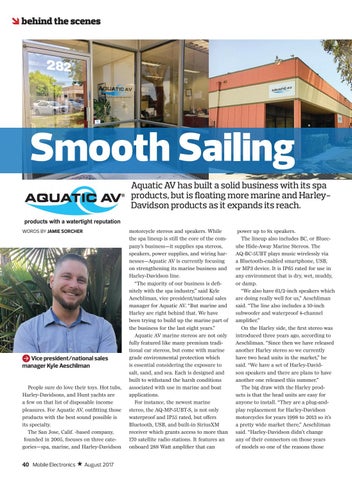 Smooth Sailing Aquatic AV has built a solid business with its spa products, but is floating more marine and HarleyDavidson products as it expands its reach. WORDS BY JAMIE SORCHER

Vice president/national sales manager Kyle Aeschliman People sure do love their toys. Hot tubs, Harley-Davidsons, and Hunt yachts are a few on that list of disposable income pleasures. For Aquatic AV, outfitting those products with the best sound possible is its specialty. The San Jose, Calif. -based company, founded in 2005, focuses on three categories—spa, marine, and Harley-Davidson

motorcycle stereos and speakers. While the spa lineup is still the core of the company’s business—it supplies spa stereos, speakers, power supplies, and wiring harnesses—Aquatic AV is currently focusing on strengthening its marine business and Harley-Davidson line. “The majority of our business is definitely with the spa industry,” said Kyle Aeschliman, vice president/national sales manager for Aquatic AV. “But marine and Harley are right behind that. We have been trying to build up the marine part of the business for the last eight years.” Aquatic AV marine stereos are not only fully featured like many premium traditional car stereos, but come with marine grade environmental protection which is essential considering the exposure to salt, sand, and sea. Each is designed and built to withstand the harsh conditions associated with use in marine and boat applications. For instance, the newest marine stereo, the AQ-MP-5UBT-S, is not only waterproof and IP55 rated, but offers Bluetooth, USB, and built-in SiriusXM receiver which grants access to more than 170 satellite radio stations. It features an onboard 288 Watt amplifier that can

power up to 8x speakers. The lineup also includes BC, or Bluecube Hide-Away Marine Stereos. The AQ-BC-5UBT plays music wirelessly via a Bluetooth-enabled smartphone, USB, or MP3 device. It is IP65 rated for use in any environment that is dry, wet, muddy, or damp. “We also have 61/2-inch speakers which are doing really well for us,” Aeschliman said. “The line also includes a 10-inch subwoofer and waterproof 4-channel amplifier.” On the Harley side, the first stereo was introduced three years ago, according to Aeschliman. “Since then we have released another Harley stereo so we currently have two head units in the market,” he said. “We have a set of Harley-Davidson speakers and there are plans to have another one released this summer.” The big draw with the Harley products is that the head units are easy for anyone to install. “They are a plug-andplay replacement for Harley-Davidson motorcycles for years 1998 to 2013 so it’s a pretty wide market there,” Aeschliman said. “Harley-Davidson didn’t change any of their connectors on those years of models so one of the reasons those