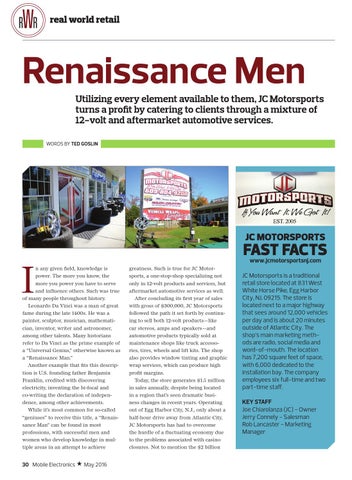 Utilizing every element available to them, JC Motorsports turns a profit by catering to clients through a mixture of 12-volt and aftermarket automotive services.

n any given field, knowledge is power. The more you know, the more you power you have to serve and influence others. Such was true of many people throughout history. Leonardo Da Vinci was a man of great fame during the late 1400s. He was a painter, sculptor, musician, mathematician, inventor, writer and astronomer, among other talents. Many historians refer to Da Vinci as the prime example of a “Universal Genius,” otherwise known as a “Renaissance Man.” Another example that fits this description is U.S. founding father Benjamin Franklin, credited with discovering electricity, inventing the bi-focal and co-writing the declaration of independence, among other achievements. While it’s most common for so-called “geniuses” to receive this title, a “Renaissance Man” can be found in most professions, with successful men and women who develop knowledge in multiple areas in an attempt to achieve

greatness. Such is true for JC Motorsports, a one-stop-shop specializing not only in 12-volt products and services, but aftermarket automotive services as well. After concluding its first year of sales with gross of $300,000, JC Motorsports followed the path it set forth by continuing to sell both 12-volt products—like car stereos, amps and speakers—and automotive products typically sold at maintenance shops like truck accessories, tires, wheels and lift kits. The shop also provides window tinting and graphic wrap services, which can produce high profit margins. Today, the store generates $1.5 million in sales annually, despite being located in a region that’s seen dramatic business changes in recent years. Operating out of Egg Harbor City, N.J., only about a half-hour drive away from Atlantic City, JC Motorsports has had to overcome the hurdle of a fluctuating economy due to the problems associated with casino closures. Not to mention the $2 billion

JC Motorsports is a traditional retail store located at 831 West White Horse Pike, Egg Harbor City, NJ, 09215. The store is located next to a major highway that sees around 12,000 vehicles per day and is about 20 minutes outside of Atlantic City. The shop’s main marketing methods are radio, social media and word-of-mouth. The location has 7,200 square feet of space, with 6,000 dedicated to the installation bay. The company employees six full-time and two part-time staff. KEY STAFF Joe Chiarolanza (JC) - Owner Jerry Connely - Salesman Rob Lancaster - Marketing Manager