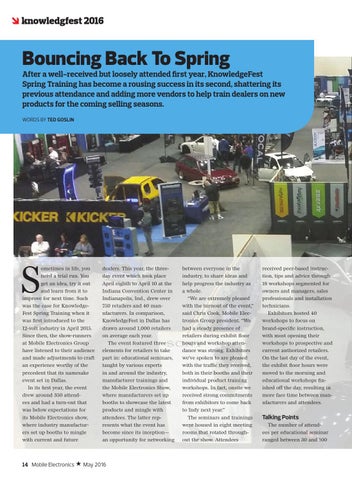 Bouncing Back To Spring

After a well-received but loosely attended first year, KnowledgeFest Spring Training has become a rousing success in its second, shattering its previous attendance and adding more vendors to help train dealers on new products for the coming selling seasons. WORDS BY TED GOSLIN

ometimes in life, you need a trial run. You get an idea, try it out and learn from it to improve for next time. Such was the case for KnowledgeFest Spring Training when it was first introduced to the 12-volt industry in April 2015. Since then, the show-runners at Mobile Electronics Group have listened to their audience and made adjustments to craft an experience worthy of the precedent that its namesake event set in Dallas. In its first year, the event drew around 350 attendees and had a turn-out that was below expectations for its Mobile Electronics show, where industry manufacturers set up booths to mingle with current and future

dealers. This year, the threeday event which took place April eighth to April 10 at the Indiana Convention Center in Indianapolis, Ind., drew over 750 retailers and 40 manufacturers. In comparison, KnowledgeFest in Dallas has drawn around 1,000 retailers on average each year. The event featured three elements for retailers to take part in: educational seminars, taught by various experts in and around the industry, manufacturer trainings and the Mobile Electronics Show, where manufacturers set up booths to showcase the latest products and mingle with attendees. The latter represents what the event has become since its inception— an opportunity for networking

between everyone in the industry, to share ideas and help progress the industry as a whole. “We are extremely pleased with the turnout of the event,” said Chris Cook, Mobile Electronics Group president. “We had a steady presence of retailers during exhibit floor hours and workshop attendance was strong. Exhibitors we’ve spoken to are pleased with the traffic they received, both in their booths and their individual product training workshops. In fact, onsite we received strong commitments from exhibitors to come back to Indy next year.” The seminars and trainings were housed in eight meeting rooms that rotated throughout the show. Attendees

received peer-based instruction, tips and advice through 18 workshops segmented for owners and managers, sales professionals and installation technicians. Exhibitors hosted 40 workshops to focus on brand-specific instruction, with most opening their workshops to prospective and current authorized retailers. On the last day of the event, the exhibit floor hours were moved to the morning and educational workshops finished off the day, resulting in more face time between manufacturers and attendees.