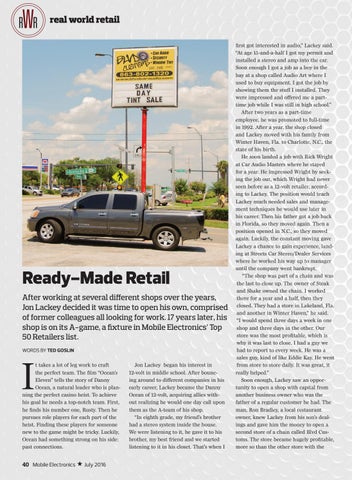 Ready-Made Retail After working at several different shops over the years, Jon Lackey decided it was time to open his own, comprised of former colleagues all looking for work. 17 years later, his shop is on its A-game, a fixture in Mobile Electronics’ Top 50 Retailers list. WORDS BY TED GOSLIN

t takes a lot of leg work to craft the perfect team. The film “Ocean’s Eleven” tells the story of Danny Ocean, a natural leader who is planning the perfect casino heist. To achieve his goal he needs a top-notch team. First, he finds his number one, Rusty. Then he pursues role players for each part of the heist. Finding these players for someone new to the game might be tricky. Luckily, Ocean had something strong on his side: past connections.

Jon Lackey began his interest in 12-volt in middle school. After bouncing around to different companies in his early career, Lackey became the Danny Ocean of 12-volt, acquiring allies without realizing he would one day call upon them as the A-team of his shop. “In eighth grade, my friend’s brother had a stereo system inside the house. We were listening to it, he gave it to his brother, my best friend and we started listening to it in his closet. That’s when I

first got interested in audio,” Lackey said. “At age 15-and-a-half I got my permit and installed a stereo and amp into the car. Soon enough I got a job as a boy in the bay at a shop called Audio Art where I used to buy equipment. I got the job by showing them the stuff I installed. They were impressed and offered me a parttime job while I was still in high school.” After two years as a part-time employee, he was promoted to full-time in 1992. After a year, the shop closed and Lackey moved with his family from Winter Haven, Fla. to Charlotte, N.C., the state of his birth. He soon landed a job with Rick Wright at Car Audio Masters where he stayed for a year. He impressed Wright by seeking the job out, which Wright had never seen before as a 12-volt retailer, according to Lackey. The position would teach Lackey much needed sales and management techniques he would use later in his career. Then his father got a job back in Florida, so they moved again. Then a position opened in N.C., so they moved again. Luckily, the constant moving gave Lackey a chance to gain experience, landing at Streets Car Stereo/Dealer Services where he worked his way up to manager until the company went bankrupt. “The shop was part of a chain and was the last to close up. The owner of Steak and Shake owned the chain. I worked there for a year and a half, then they closed. They had a store in Lakeland, Fla. and another in Winter Haven,” he said. “I would spend three days a week in one shop and three days in the other. Our store was the most profitable, which is why it was last to close. I had a guy we had to report to every week. He was a sales guy, kind of like Eddie Kay. He went from store to store daily. It was great, it really helped.” Soon enough, Lackey saw an opportunity to open a shop with capital from another business owner who was the father of a regular customer he had. The man, Ron Bradley, a local restaurant owner, knew Lackey from his son’s dealings and gave him the money to open a second store of a chain called Blvd Customs. The store became hugely profitable, more so than the other store with the