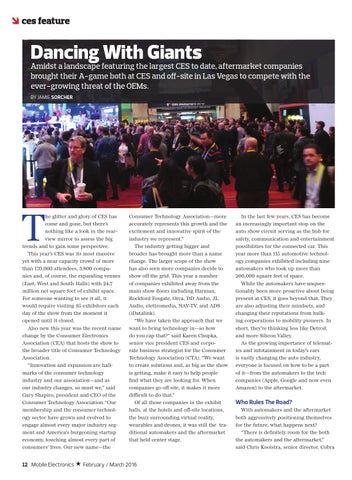 Dancing With Giants Amidst a landscape featuring the largest CES to date, aftermarket companies brought their A-game both at CES and off-site in Las Vegas to compete with the ever-growing threat of the OEMs. BY JAMIE SORCHER

he glitter and glory of CES has come and gone, but there’s nothing like a look in the rearview mirror to assess the big trends and to gain some perspective. This year’s CES was its most massive yet with a near capacity crowd of more than 170,000 attendees, 3,800 companies and, of course, the expanding venues (East, West and South Halls) with 24.7 million net square feet of exhibit space. For someone wanting to see it all, it would require visiting 95 exhibitors each day of the show from the moment it opened until it closed. Also new this year was the recent name change by the Consumer Electronics Association (CEA) that hosts the show to the broader title of Consumer Technology Association. “Innovation and expansion are hallmarks of the consumer technology industry and our association—and as our industry changes, so must we,” said Gary Shapiro, president and CEO of the Consumer Technology Association. “Our membership and the consumer technology sector have grown and evolved to engage almost every major industry segment and America’s burgeoning startup economy, touching almost every part of consumers’ lives. Our new name—the

Consumer Technology Association—more accurately represents this growth and the excitement and innovative spirit of the industry we represent.” The industry getting bigger and broader has brought more than a name change. The larger scope of the show has also seen more companies decide to show off the grid. This year a number of companies exhibited away from the main show floors including Harman, Rockford Fosgate, Orca, DD Audio, JL Audio, elettromedia, NAV-TV, and ADS (iDatalink). “We have taken the approach that we want to bring technology in—so how do you cap that?” said Karen Chupka, senior vice president CES and corporate business strategist for the Consumer Technology Association (CTA). “We want to create solutions and, as big as the show is getting, make it easy to help people find what they are looking for. When companies go off site, it makes it more difficult to do that.” Of all those companies in the exhibit halls, at the hotels and off-site locations, the buzz surrounding virtual reality, wearables and drones, it was still the traditional automakers and the aftermarket that held center stage.

In the last few years, CES has become an increasingly important stop on the auto show circuit serving as the hub for safety, communication and entertainment possibilities for the connected car. This year more than 115 automotive technology companies exhibited including nine automakers who took up more than 200,000 square feet of space. While the automakers have unquestionably been more proactive about being present at CES, it goes beyond that. They are also adjusting their mindsets, and changing their reputations from hulking corporations to mobility pioneers. In short, they’re thinking less like Detroit and more Silicon Valley. As the growing importance of telematics and infotainment in today’s cars is vastly changing the auto industry, everyone is focused on how to be a part of it—from the automakers to the tech companies (Apple, Google and now even Amazon) to the aftermarket.