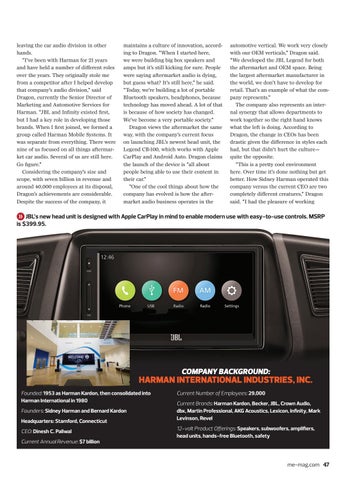 leaving the car audio division in other hands. &quot;I&#39;ve been with Harman for 21 years and have held a number of different roles over the years. They originally stole me from a competitor after I helped develop that company&#39;s audio division,&quot; said Dragon, currently the Senior Director of Marketing and Automotive Services for Harman. &quot;JBL and Infinity existed first, but I had a key role in developing those brands. When I first joined, we formed a group called Harman Mobile Systems. It was separate from everything. There were nine of us focused on all things aftermarket car audio. Several of us are still here. Go figure.&quot; Considering the company&#39;s size and scope, with seven billion in revenue and around 40,000 employees at its disposal, Dragon&#39;s achievements are considerable. Despite the success of the company, it

maintains a culture of innovation, according to Dragon. &quot;When I started here, we were building big box speakers and amps but it&#39;s still kicking for sure. People were saying aftermarket audio is dying, but guess what? It&#39;s still here,&quot; he said. &quot;Today, we&#39;re building a lot of portable Bluetooth speakers, headphones, because technology has moved ahead. A lot of that is because of how society has changed. We&#39;ve become a very portable society.&quot; Dragon views the aftermarket the same way, with the company’s current focus on launching JBL&#39;s newest head unit, the Legend CB-100, which works with Apple CarPlay and Android Auto. Dragon claims the launch of the device is &quot;all about people being able to use their content in their car.&quot; &quot;One of the cool things about how the company has evolved is how the aftermarket audio business operates in the

automotive vertical. We work very closely with our OEM verticals,&quot; Dragon said. &quot;We developed the JBL Legend for both the aftermarket and OEM space. Being the largest aftermarket manufacturer in the world, we don&#39;t have to develop for retail. That&#39;s an example of what the company represents.&quot; The company also represents an internal synergy that allows departments to work together so the right hand knows what the left is doing. According to Dragon, the change in CEOs has been drastic given the difference in styles each had, but that didn&#39;t hurt the culture— quite the opposite. &quot;This is a pretty cool environment here. Over time it&#39;s done nothing but get better. How Sidney Harman operated this company versus the current CEO are two completely different creatures,&quot; Dragon said. &quot;I had the pleasure of working

JBL’s new head unit is designed with Apple CarPlay in mind to enable modern use with easy-to-use controls. MSRP is $399.95.