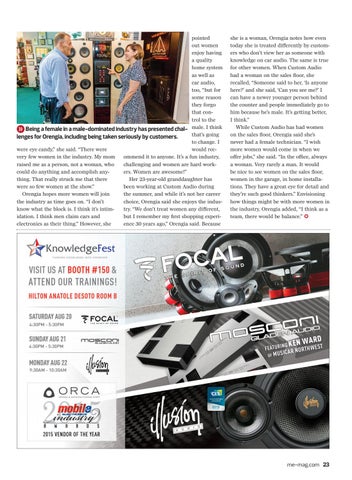 pointed out women enjoy having a quality home system as well as car audio, too, “but for some reason they forgo that control to the Being a female in a male-dominated industry has presented chal- male. I think that’s going lenges for Orengia, including being taken seriously by customers. to change. I were eye candy,” she said. “There were would recvery few women in the industry. My mom ommend it to anyone. It’s a fun industry, raised me as a person, not a woman, who challenging and women are hard workcould do anything and accomplish anyers. Women are awesome!” thing. That really struck me that there Her 23-year-old granddaughter has were so few women at the show.” been working at Custom Audio during Orengia hopes more women will join the summer, and while it’s not her career the industry as time goes on. “I don’t choice, Orengia said she enjoys the indusknow what the block is. I think it’s intimtry. “We don’t treat women any different, idation. I think men claim cars and but I remember my first shopping experielectronics as their thing.” However, she ence 30 years ago,” Orengia said. Because

she is a woman, Orengia notes how even today she is treated differently by customers who don’t view her as someone with knowledge on car audio. The same is true for other women. When Custom Audio had a woman on the sales floor, she recalled, “Someone said to her, ‘Is anyone here?’ and she said, ‘Can you see me?’ I can have a newer younger person behind the counter and people immediately go to him because he’s male. It’s getting better, I think.” While Custom Audio has had women on the sales floor, Orengia said she’s never had a female technician. “I wish more women would come in when we offer jobs,” she said. “In the office, always a woman. Very rarely a man. It would be nice to see women on the sales floor, women in the garage, in home installations. They have a great eye for detail and they’re such good thinkers.” Envisioning how things might be with more women in the industry, Orengia added, “I think as a team, there would be balance.” 