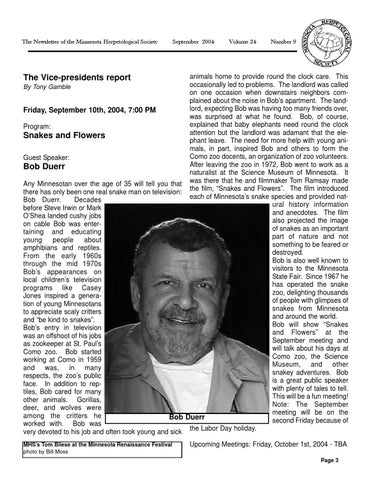 The Newsletter of the Minnesota Herpetological Society

The Vice-presidents report By Tony Gamble

Bob Duerr Any Minnesotan over the age of 35 will tell you that there has only been one real snake man on television: Bob Duerr. Decades before Steve Irwin or Mark O’Shea landed cushy jobs on cable Bob was entertaining and educating young people about amphibians and reptiles. From the early 1960s through the mid 1970s Bob’s appearances on local children’s television programs like Casey Jones inspired a generation of young Minnesotans to appreciate scaly critters and “be kind to snakes”. Bob’s entry in television was an offshoot of his jobs as zookeeper at St. Paul’s Como zoo. Bob started working at Como in 1959 and was, in many respects, the zoo’s public face. In addition to reptiles, Bob cared for many other animals. Gorillas, deer, and wolves were among the critters he Bob worked with. Bob was very devoted to his job and often took young and sick MHS’s Tom Bliese at the Minnesota Renaissance Festival photo by Bill Moss

animals home to provide round the clock care. This occasionally led to problems. The landlord was called on one occasion when downstairs neighbors complained about the noise in Bob’s apartment. The landlord, expecting Bob was having too many friends over, was surprised at what he found. Bob, of course, explained that baby elephants need round the clock attention but the landlord was adamant that the elephant leave. The need for more help with young animals, in part, inspired Bob and others to form the Como zoo docents, an organization of zoo volunteers. After leaving the zoo in 1972, Bob went to work as a naturalist at the Science Museum of Minnesota. It was there that he and filmmaker Tom Ramsay made the film, “Snakes and Flowers”. The film introduced each of Minnesota’s snake species and provided natural history information and anecdotes. The film also projected the image of snakes as an important part of nature and not something to be feared or destroyed. Bob is also well known to visitors to the Minnesota State Fair. Since 1967 he has operated the snake zoo, delighting thousands of people with glimpses of snakes from Minnesota and around the world. Bob will show “Snakes and Flowers” at the September meeting and will talk about his days at Como zoo, the Science Museum, and other snakey adventures. Bob is a great public speaker with plenty of tales to tell. This will be a fun meeting! Note: The September meeting will be on the Duerr second Friday because of the Labor Day holiday. Upcoming Meetings: Friday, October 1st, 2004 - TBA Page 3 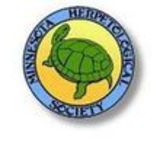