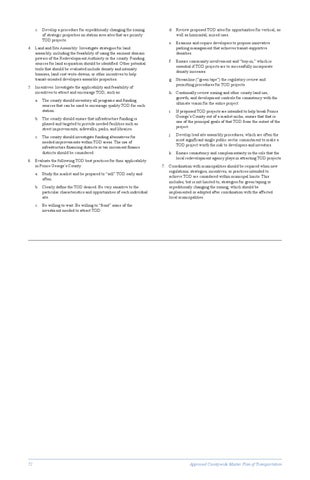 c. Develop a procedure for expeditiously changing the zoning of strategic properties on station area sites that are priority TOD projects. 4. Land and Site Assembly: Investigate strategies for land assembly, including the feasibility of using the eminent domain powers of the Redevelopment Authority or the county. Funding sources for land acquisition should be identified. Other potential tools that should be evaluated include density and intensity bonuses, land cost write-downs, or other incentives to help transit-oriented developers assemble properties. 5. Incentives: Investigate the applicability and feasibility of incentives to attract and encourage TOD, such as: a. The county should inventory all programs and funding sources that can be used to encourage quality TOD for each station. b. The county should ensure that infrastructure funding is phased and targeted to provide needed facilities such as street improvements, sidewalks, parks, and libraries. c. The county should investigate funding alternatives for needed improvements within TOD areas. The use of infrastructure financing districts or tax increment finance districts should be considered. 6. Evaluate the following TOD best practices for their applicability in Prince George’s County: a. Study the market and be prepared to “sell” TOD early and often. b. Clearly define the TOD desired. Be very sensitive to the particular characteristics and opportunities of each individual site.

d. Review proposed TOD sites for opportunities for vertical, as well as horizontal, mixed uses. e. Examine and require developers to propose innovative parking management that achieves transit-supportive densities. f. Ensure community involvement and “buy-in,” which is essential if TOD projects are to successfully incorporate density increases. g. Streamline (“green tape”) the regulatory review and permitting procedures for TOD projects. h. Continually review zoning and other county land use, growth, and development controls for consistency with the ultimate vision for the entire project. i. If proposed TOD projects are intended to help break Prince George’s County out of a market niche, ensure that that is one of the principal goals of that TOD from the outset of the project. j. Develop lead site assembly procedures, which are often the most significant single public sector commitment to make a TOD project worth the risk to developers and investors. k. Ensure consistency and complementarity in the role that the local redevelopment agency plays in attracting TOD projects. 7. Coordination with municipalities should be required when new regulations, strategies, incentives, or practices intended to achieve TOD are considered within municipal limits. This includes, but is not limited to, strategies for green taping or expeditiously changing the zoning, which should be implemented or adopted after coordination with the affected local municipalities.