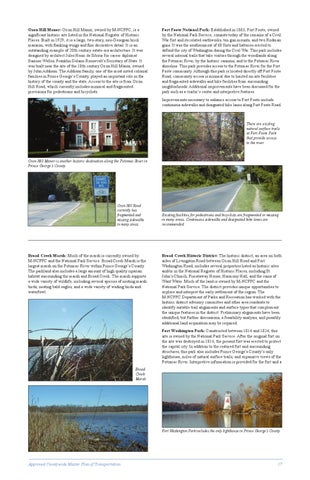 Oxon Hill Manor: Oxon Hill Manor, owned by M-NCPPC, is a significant historic site listed in the National Register of Historic Places. Built in 1929, it is a large, two-story, neo-Georgian brick mansion, with flanking wings and fine decorative detail. It is an outstanding example of 20th century estate-era architecture. It was designed by architect Jules Henri de Sibour for career diplomat Sumner Welles, Franklin Delano Roosevelt’s Secretary of State. It was built near the site of the 18th century Oxon Hill Manor, owned by John Addison. The Addison family, one of the most noted colonial families in Prince George’s County, played an important role in the history of the county and the state. Access to the site is from Oxon Hill Road, which currently includes minimal and fragmented provisions for pedestrians and bicyclists.

Fort Foote National Park: Established in 1863, Fort Foote, owned by the National Park Service, consists today of the remains of a Civil War fort and its related earthworks, ten gun mounts, and two Rodman guns. It was the southernmost of 68 forts and batteries erected to defend the city of Washington during the Civil War. This park includes several internal trails that take visitors through the woodlands along the Potomac River, by the historic cannons, and to the Potomac River shoreline. This park provides access to the Potomac River for the Fort Foote community. Although this park is located directly off Fort Foote Road, community access is minimal due to limited on-site facilities and fragmented sidewalks and bike facilities from surrounding neighborhoods. Additional improvements have been discussed for the park such as a visitor’s center and interpretive features. Improvements necessary to enhance access to Fort Foote include continuous sidewalks and designated bike lanes along Fort Foote Road.

There are existing natural surface trails at Fort Foote Park that provide access to the river.

Oxon Hill Manor is another historic destination along the Potomac River in Prince George’s County.

Oxon Hill Road currently has fragmented and missing sidewalks in many areas.

Broad Creek Marsh: Much of the marsh is currently owned by M-NCPPC and the National Park Service. Broad Creek Marsh is the largest marsh on the Potomac River within Prince George’s County. The parkland also includes a large amount of high quality riparian habitat surrounding the marsh and Broad Creek. The marsh supports a wide variety of wildlife, including several species of nesting marsh birds, nesting bald eagles, and a wide variety of wading birds and waterfowl.

Existing facilities for pedestrians and bicyclists are fragmented or missing in many areas. Continuous sidewalks and designated bike lanes are recommended.

Broad Creek Historic District: The historic district, an area on both sides of Livingston Road between Oxon Hill Road and Fort Washington Road, includes several properties listed as historic sites and/or in the National Register of Historic Places, including St. John’s Church, Piscataway House, Harmony Hall, and the ruins of Want Water. Much of the land is owned by M-NCPPC and the National Park Service. The district provides unique opportunities to explore and interpret the early settlement of the region. The M-NCPPC Department of Parks and Recreation has worked with the historic district advisory committee and other area residents to identify suitable trail alignments and surface types that complement the unique features in the district. Preliminary alignments have been identified, but further discussions, a feasibility analysis, and possibly additional land acquisition may be required. Fort Washington Park: Constructed between 1814 and 1824, this site is owned by the National Park Service. After the original fort on the site was destroyed in 1814, the present fort was erected to protect the capital city. In addition to the restored fort and surrounding structures, this park also includes Prince George’s County’s only lighthouse, miles of natural surface trails, and expansive views of the Potomac River. Interpretive information is provided for the fort and a