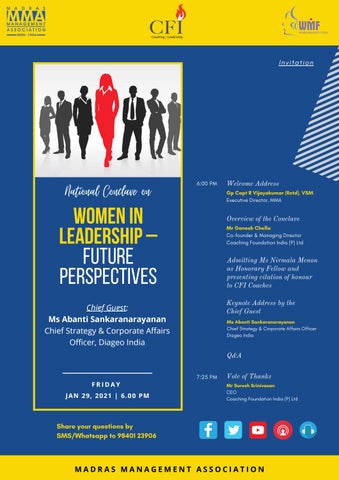 OBJECTIVE The engage all stakeholders in discussions about the unique context that informs and influences the ability of women to raise to levels of leadership within organisations and sustain it. Such discussions will raise awareness and also influence the design and launch of the right kind of developmental interventions that will see more and more women in leadership in India.

efforts needed to become a leader are fairly universal, there are additional challenges,

hurdles, biases, prejudices and belief systems that women seemed to face. Clearly, there is need for envisioning an alternate model for developing women in leadership.

CFI has been deeply committed to the cause of women in leadership in India. Its research on the subject reveals that women tend to either drop out or moderate their leadership ambitions once they reach mid-senior management levels. This is more often driven by competing personal and professional

CFI uses research, education and development to address this burning need. It is also constantly making efforts to bring the whole system into the room for deliberations about this all important subject. The current conclave is yet another effort in this direction.

leader development in India. CFI has been doing this by admitting them as Honorary

This year, CFI will be honouring Ms. Nirmala Menon, Founder & CEO Interweave Consulting for her contributions to empowering women in organisations by admitting her as an Honorary Fellow of CFI.

As Founder & CEO at Interweave, her contributions in the field of Diversity and Inclusion has been recognised with her being listed among the "Top 50 Diversity Professionals" in the Global Diversity List.

Over the last 13 years, Interweave has been a pioneer in D&I and Women’s Leadership Development consulting space in India and was part of the first informal international advisory group of the UN Global Compact & the UNIFEM that finalised the Women’s Empowerment Principles. Nirmala’s work covers areas like Gender balance, biases at work, generational diversity, women’s leadership etc and these are

delivered over multiple platforms like workshops, webinars and videos, e-Learning

solutions etc. Through her tireless work, she has touched the lives of thousands of women and significantly enhanced their ability to stay in the game, build sustainable careers and raise to levels of leadership.

CITATION OF HONOUR We will also be presenting a citation of honour to five senior CFI Coaches for their contribution to SheLeads, CFI’s flagship women leadership program

Profile of the Chief Guest ABANTI SANKARANARAYANAN Abanti Sankaranarayanan leads the Strategy and Corporate Affairs functions at Diageo India (United Spirits Ltd) and is a member of its 8-member Executive Committee.

Prior to Diageo, Abanti served as a member of the Tata Administrative Service (TAS)

managing some of the best-known consumer brands of the Tata Group in India, United Kingdom and the United States. In her 17-year career with the Tata group, Abanti

Her contribution to the business has been recognized by BW BusinessWorld (Most Influential Women, 2020) Fortune India (The Most Powerful Women in Business; 2012,

Abanti is now the first woman from India and the first person from Diageo India to be a Keeper of the Quaich, an international recognition for a select group of people around the world for their outstanding contribution to the Scotch Whisky industry.

Abanti is an Economics Graduate from St. Stephen’s College, Delhi and an MBA from Indian Institute of Management (IIM), Ahmedabad. 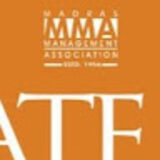