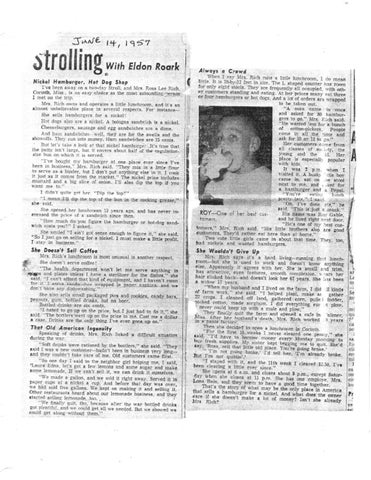 When I say' Mrs. Rich runs a little lunchroom, I do mean little. It is 10-by-12 feet in size. The L shaped counter has room for only eight stools. They are frequently all occupied, with other customers standing and eating. At her prices many eat three or four hamburgers or hot dogs. And a lot of orders are wrapped to be taken out. "A. man came in 'once and asked for 80 hamburgers to go," Mrs. Rich said. "He wanted 'em for a bunch of cotton-pickers. People come in all the time and ask for 10 or 12 to go." Her customers c..me from all classes of so L. ty, the young and the Her place is especial'', popular with kids. It was 2 p.m. when I visited it. A husky itle boy came in, sat on ,ie stool next to me, and ,ked for a hambarger and a Pepsi.

I've been away on a two-day Stroll, and Mrs. Rosa Lee Rich, Corinth, Miss., is an easy choice as the most astoundinganersons I met on the trip. Mrs. Rich owns and operates a little lunchroom, and it's an almost unbelievable place in several respects. For instance— She sells hamburgers for a nickel! Hot dogs also are a nickel. A bologna sandwich is a nickel. Cheeseburgers, sausage and egg sandwiches are a dime. And ham sandwiches—well, they are for the swells and the showoffs. They run into money. Ham sandwiches are 15 cents. But let's take a look at that nickel hamburge: .It's true that the patty isn't large, but it covers about half of the regulation size bun on which it is served. "I've bought my hamburger at one place ever since I've been in business," Mrs. Rich said. "They mix in a little flour to serve as a binder, but I don't put anything else in it. I cook it just as it comes from the market." The nickel price includes mustard and a big slice of onion. I'll also dip the top if you wane me to." I didn't quite get her, "Dip the top?" I mean „I'll dip the:top of the bun in the cooking grease," she said. She opened her lunchroom 12 years ago, and has never increased the price of a sandwich since then. "How much do you figure the hamburger or hot-dog sandwich costs you?" I asked. She smiled "I ain't got sense enough to figure it," she said. "So I just go on selling for a nickel. I must make a little profit. I stay in business."

"Oh, I've done ate," he said. "This is just a snack." His name was Roy Gable, RbY—One of her best cusand he lived right next door. tomers. "He's one of my hest customers," Mrs. Rich said. "His little brothers also are good customers. They'd rather eat here than at home." Two cute little girls came in about that time. They, too, had nickels and wanted hamburgers. She Wouldn't Give Up

Mrs. Rich's lunchroom is most unusual in another respect. She doesn't serve coffee! • "The health department won't let me serve anything in - - dr-OPs and plates unless I have a sterilizer for the dishes," she said. "I can't afford that kind of equipment, and I haven't room for It I senve aandwicheg wrapped in Darer.nanittins, don't have any dish-washing." She also sells small packaged pies and cookies, candy bars, peanuts, gam, bottled drinks, but no beer. Bottled drinks are six cents. "I hated to- go up on the price, but I just had lo do it," she said. The bottlers Vent up on the price to me. Cost me a dollar a case. Drinks are the only thing I've ever gone up on."

Mrs. Rich says it's a hard living—running th , t lunchroom—but she is used to work and doesn't know anything else. ,Apparently it agrees with her. She is small and trim, has attractive, even features, smooth complexion. v. --ars her hair slicked back—and doesn't look her 67 years. She i,is been a widow 17 years. "When my husband and I lived on the `farm, I did 11 kinds of farm work," she said. "I helped plant, make ar gather 22 crops. I cleaned off land, gathered corn, pulle i fodder, nicked cotton, made sorghum. I did everything exc 't plow. never could keep up with a mule and plow." _, They finally quit the farm and opened a cafe in 'alkner, Miss. After her husband's- 'death, Mrs. Rich worked o years in a pants factor. Then she decided

Speaking of drinks, Mrs. Rich licked a difficult situation during the war. ' "Soft drinks were rationed by the bottlers," she said. "They said I was a new customer—hadn't been in business very long— and they couldn't take care of me. Old customers came first. "So one day I said, to the neighbor girl helping me, I said, 'Laura. Edna, let's get a few lemons and some sugar and make some lemonade. If we can't sell it, we can drink it ourselves. "We made a gallon, and we sold it right away. Served it in paper cups at a nickel a cup. And before that day was over, we had sold five gallons. We kept on making it and selling it. Other restaurants heard about our lemonade business, and they started selling lemonade, too. , "We finally quit, tho, because after the war bottled drinks got plentiful, and we could get all we needed. But we showed we could get along without them,"

to open a lunchroom in Corinth. "For the first 1.0 weeks I never cleared one penny," she said. "I'd have to borrow money every. Monday morning to buy fresh supplies. My sister kept begging me to quit. She'd say, 'Rosa, sell that little old place. You're going broke.' " 'I'm not going broke,' I'd tell her. 'I'm already broke. But I'm not quittin'.' "I stayed with it, and the llth week I cleared -$2.50. I've been clearing a little ever since." She opens at 6 a.m. and closes about 9 p.m., except Saturday when she closes at 11 p.m. She has one employe, Mrs. Lona Bain, and they seem to have a good time together. That's the story of what may be the only place in America that sells a hamburger for a nickel. And what does the owner care if she doesn't make a lot of money? Isn't she already Mrs. Rich? - 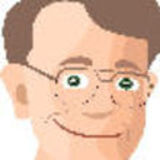