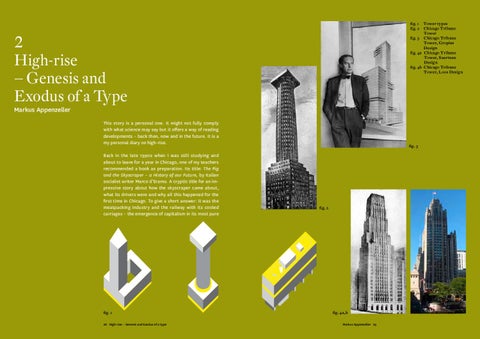 2 High-rise – Genesis and ­Exodus of a Type Markus Appenzeller

This story is a personal one. It might not fully comply with what science may say but it offers a way of reading developments – back then, now and in the future. It is a my personal diary on high-rise. Back in the late 1990s when I was still studying and about to leave for a year in Chicago, one of my teachers recommended a book as preparation. Its title: The Pig and the Skyscraper – a History of our Future, by Italian socialist writer Marco d’Eramo. A cryptic title for an impressive story about how the skyscraper came about, what its drivers were and why all this happened for the first time in Chicago. To give a short answer: it was the meatpacking industry and the railway with its cooled carriages – the emergence of capitalism in its most pure

form and the fact that the “windy city” was and still is the crossroads of the United States. For the first time in history scarcity of land, technology and the ego of investors and architects created a critical mass for the high-rise to emerge. Shortly thereafter – it was in the Spring of 2000 while in Chicago – I stumbled across another important but less known event that took place in the same city. An architectural competition held by the Chicago Tribune. ->fig. 1,2,3,4a,b By that time it was the biggest newspaper of the city and one of the most important ones in the entire USA. In 1922 they invited architects from all over the world to join an international design competition for a tower that was supposed to become “the most beautiful and eye-catching building in the world” – their future headquarters. What is not so important about that story is the winning entry – a design by John Mead Howells and Raymond Hood in the neo-Gothic style popular around the time. The much more interesting part is the range of entries contributed by some of the most renowned architects of the time. Gropius, Saarinen, the Luckhard broth-

ers, Richard Mine and many others sent in proposals. The most radical one is probably the entry by Adolf Loos – a gigantic Doric column mutated into a building. The competition and especially the different renderings showed that by that time typologically the world had already developed two types of high-rise buildings. They responded to the different urban conditions that could be found in Europe and the United States and show the clash of urban cultures that had developed in the old and the new world. While most European cities had grown organically over centuries, American ones had been planned and grown to metropolitan scale within a short time. European cities were based on an axis and important iconic buildings. The American city was based on the grid where hierarchy of buildings was achieved by widening the street and creating a plaza or simply by the scale of the building. Subsequently in the entries of European architects the high-rise was an icon that stood on its own like the churches and palaces did in history. It was an icon to be placed in key locations on an axis. The entries of many American architects showed towers that were different: a city block with a part extruded, a high building in a row of buildings. This can best be seen in some of the skyscrapers built around the time in New York with the Woolworth Building as the archetype. ->fig. 5 In 2008 I went to the Cote d’Azur together with my family. Not to see architecture but to enjoy the beaches with the kids. But of course – if one is in Marseille anyway then… – well, we went to see the Unité d’Habitation ->fig. 6 designed in 1952 by Le Corbusier. It was a moving experience. A slab type high-rise where pedestrian streets were lifted into the air, where the roof was programmed with kindergarten and swimming pool and where the little store on the 9th level still provided probably the same selection of food it did when the building was completed. The other shops in the meantime had been taken over by followers of Corbu. They are easy to recognize since they wear the same glasses as the master. This building is a different kind of high-rise, a slab type with a mix of uses on higher levels. As a discovery tour of high-rises, we can summarize three different types: a) the American high-rise, built in a row; b) the European high-rise, a free standing icon; Markus Appenzeller 31

32 High-rise – Genesis and ­Exodus of a type

c) the inventions of Le Corbusier. All other buildings refer back to these archetypes and it is these three archetypes that were sent on a tour around the world in the last 70 years – with stops in Europe, East Asia and the Persian Gulf. In all these places they mutated and in each of these places the conditions found on the ground are the defining factors for the type of mutation. ->fig. 7

Fall 2008: in the Persian Gulf incredible amounts of money met a barely existing urban culture and low pressure from the demographic side. A people that until half a century ago had largely lived in Bedouin tents, had become rich by exploiting the oil wells in the region, and had erected nothing other than enormous, autonomous tents, have culminated – at this point anyway – with the Burj Khalifa. ->fig. 8 Technically this building might be a masterpiece of engineering and as an icon demonstrating ego and ambition it might work – though this is highly questionable at present. What is interesting when looking at this supericonic mutation of the European style high-rise is that the sheer size leads to a mixed use building and a structure where what could be considered public (or publically accessible) space has been lifted into the sky. It remains to be seen if these public floors will develop into spaces of a particular, unprecedented quality, but for the first time

At The Top observation deck

they exist on a larger scale. In the Summer of 2009 I repeatedly went to China. Particularly there, but also in the rest of East Asia, reasonable amounts of funds are available but in contrast to the Gulf, an urban culture exists, has done for a long time and cities are facing enormous population growth. This leads to unprecedented densities and land values with the highrise often as the only possible solution. Here I am not talking about the omnipresent residential compounds that can be found in all Chinese cities. This is about the key locations in these cities. Locations where complexity (roads, public transport, existing but small amounts of open space…) is a given condition and any building has to deal with it. This lends itself almost naturally to hybrid buildings ->fig. 9 or ensembles thereof. On the intersection of two metro lines and adjacent to a motorway ramp are a shopping mall with restaurants and a rooftop park, a hotel and several office towers and condominium high-rises combined with a large parking garage, a karaoke club, a community center and a myriad of restaurants. Not only do these buildings stop being readable as autonomous structures, they also combine all three archetypes of towers and in their almost endless recombination form

interesting collective hybrids that resemble 3D cities from science fiction movies. Prominent examples are the Hyper Building projected for Bangkok and CCTV->fig. 10 in Beijing designed by OMA or Steven Holl’s MoMA Modern II ->fig. 11 in the same city. February 2011: Back in Europe on a grey winter day – in a region where demographic pressure has ceased to exist, a wealthy region and a region with an urban tissue largely defined by mid-size cities of 200,000–700,000 inhabitants. Here the high-rise in most cases is not the most obvious choice, but it is a choice that can create a unique selling point in a highly competitive real estate market and it is a choice that caters to the desires of a growing number of people wanting to live in the centers of these cities again. In the Netherlands we have been learning from the results that have been generated in the East and South of our continent – or better – we have been part of the perpetual cross fertilization that globalization has led to. European-scale super icons have been proposed, such as the Belle van Zuylen tower ->fig. 12 in Leidsche Rijn, designed by De Architekten Cie. High-rise buildings with quasi-public spaces on higher levels have been

proposed such as the Tour Signal ->fig. 13 by Jean Nouvel for La Défense in Paris. And also European versions of the collective hybrid such as the De Rotterdam Building ->fig. 14 by OMA are under construction. But all of them are mini-versions of their Arabic and Asian counterparts and are more the result of political will than immediate market necessity. In the future, high-rise in Europe will really be less about the buildings themselves, than about the combination or composition of high-rises. This “curation” of towers that form ensembles together create a critical mass for a more intense urban life. There are numerous examples where the aim to cluster individual high-rise buildings has led fig. 16

to quality results. There have been a series of proposals for a coordinated approach such as the “city crown” idea of Bruno Taut and the proposal for a ring of high-rises around the center of Stuttgart by Ernst Otto Oswald. Today Rotterdam’s Wijnhaven Island, ->fig. 15,16,17,18 the area around Liverpool Street Station in London ->fig. 19 and La Défense ->fig.20 in Paris can serve as examples for successful curatorship that moved the focus away from the individual building towards an overall massing strategy for all of them. It is this approach that still makes Eu-

ropean city skylines appear different than elsewhere. What form the high-rise will take next remains pure speculation. The CCTV project showed that you can be extremely iconic without being extremely high. The Burj Khalifa demonstrated that technically virtually any height one can afford is possible and with the market economy increasingly dictating what cities can or cannot do, any curatorial high-rise concept can be jeopardized quickly. Maybe the discussion should not focus on high-rise as an autonomous type anymore. Maybe the type as such is a Modernist concept we all should seek to overcome and we should develop hybrids for the benefit of the liveliness and complexity of our cities and for the benefit of our creative potential as designers and users of urban spaces equally. Highrise - Exodus of a type

Highrise - Exodus of a type