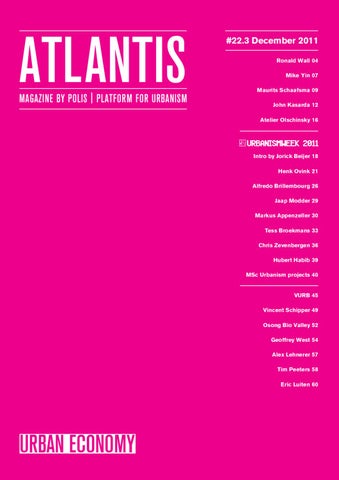 Having many projects in countries all over the world with different cultures could result in working with different methods and strategies. However, Markus Appenzeller stresses that there are many approach simi-

two types within both worlds. Appenzeller underpins his statement and introduces the philosophy of KCAP by illustrating KCAP’s project in Shenzhen in China and the project in Duisburg in Germany.

larities when working on projects all over the world. This was his underlying statement at his lecture for the Urbanism Week 2011. This interview goes more in-depth regarding this statement and investigates the role of an urbanist and KCAP’s activities in China. Lecture summary

As director of international projects at KCAP, Markus Appenzeller showed he deals with projects in the Western world, particularly Europe, as well as in the Eastern world, Asia. From an economical and political point of view the world is heading into two directions; the Western world is characterized as a world of stagnation with a high GDP level but stagnation in population growth. Yet the Eastern world and South America and Africa are still growing in both GDP level and population. Appenzeller states that Western designers are only able to reason within a prospect of growth and miss opportunities to react positively to stagnation, such as in the romantic period. This leads currently to the result that stagnation always has a negative connotation. By introducing “exploding China, imploding Europe” in relation to growth and stagnation respectively, Appenzeller wondered if there are two types of urbanism. Quickly he answers his question by stating that there are 1,5 types of urbanism due to a lot of similarities in the

The underlying framework, which is similar, is what characterizes both projects. The underlying framework takes streets and the public spaces as the basis for the development of the area because these are a lasting foundation for years. By using the same tool, the framework that lasts in the long term, Appenzeller describes the similarities between urbanism in Europe and Asia. This long-term strategy goes hand-in-hand with the urban infill of this long-term framework. This urban infill is the short-term implication that is based on keeping and introducing new aspects within an area, with respect to the local conditions. Despite the importance of localities and apt short-term strategies, Appenzeller advocated that as an urbanist one firstly ought to think big by establishing an important long-term framework.

ously employed as a senior architect at OMA in Rotterdam.

If you had a chair at TU Delft, how would you name it? “Complex city. Since it is definable in many ways and not bound to one specific discourse.”

How do you remain motivated to go to work each morning? “I do not consider my work as a job. My work is a mindset, applicable wherever I am.”

What is your favorite software? “Word processer and illustrator.”

In your lecture you seemed to argue that long-term strategies always have a physical form. Why is this? Could these strategies be less tangible, for example, constituting only as policies and processes?

Who is your anti-hero? “Anyone who is quoting a model of the past and renders it as the solution for today’s societal problems.”

Who is your biggest professional

“In my opinion long-term strategies constitute policy and process. However, you need to find some way of communicating the potential outcomes and this is where form comes into play.

“... you need to find some way of communicating the potential outcomes and this is where form comes into play.”

The average person will not have the patience to read through a huge book of urban design guidelines, so I believe that a strategy should always incorporate a plan, a model for people to be able to visualize the outcome. That is not to say that the model is fixed in stone but it rather should convey an atmosphere. Urban grain, building density, use patterns and also economic models in the end contribute to this atmosphere. The domain of our profession is to understand space and how to structure it.”

What, according to you, is an urbanist? Where are they situated between designer and policy-maker?

What kind of personal values do you transmit through your work? “Openness and curiosity for the unknown and fairness.”

What are the challenges for your city in the future (2020)? “Rotterdam will face its decline in impor-

“I am involved in both architecture and urban design. Yet the mindset is different within each field. An urban designer works in a highly political environment within a multiplicity of groups. Someone who is not only dealing with a single plot but in fact the totality of a city or a region - spatially, economically, socially, culturally, basically whatever can be imagined within the city. It is very complex. An urbanist acts like a mediator rather than acting only like a designer. Space need to be found to steer one’s own agenda amidst a conflict of multiple interests. An architect thinks much more about what is right for a place. There is less need to negotiate, to strike a compromise, which is actually the way an urban designer works, to mediate all these different interests and to find alliances where it is beneficial. It is also much more about ego with architects. During architectural education you are always told to explain in a lot of words why your proposal is the exact solution. But actually this is just a smokescreen for doing what you like. You are never allowed to just say, ‘I did it because I like it.’ ”

tance. Rotterdam used to have the biggest port in the world and certainly the biggest port in Europe. The economy is now shifting towards other places and I belief this will result in an identity crisis for the city. The port area is very monofunctional and has not developed other large-scale business activities that are visible elsewhere in the city.”

What is outdated in the education of urbanism and architecture? “Students are too obsessed with creating shapes. Yet since I am trained as an architect I mainly focus on architectural education. Architecture is not a social or cultural discipline anymore and it is also

What is KCAP’s unique selling point that makes them win so many competitions?

not taught as such. This is the result of a market-oriented shift within the discipline. Furthermore, many architects and urban-

“In my belief one of the reasons is that we always analyse the brief for any project very carefully. The other reason is that we are good at selling our ideas. We spend quite a lot of time on getting the story right because even the best plan is worth nothing if the story is not properly communicated. It is about looking at who you are dealing with and the

ists, both in education and practice, lack the skills to sell their ideas to clients. It is not only enough to produce good work. You need to be able to sell your ideas.”

“We spend quite a lot of time on getting the story right because even the best plan is worth nothing if the story is not properly communicated.” best way of communicating what we want to achieve. Talking to a project developer is different to talking to a regional government or an individual client – you need to find the right tone. Sometimes this also has quite an impact on the final plans. In any country we are working in we always tend to have people that come from there or at least speak the language and then do additional research to see what is really going on there on the ground. A certain amount of success is also due to the fact that once you have a name in the industry it is slightly easier to win than if you are completely unknown.”

tecture, involvement throughout the whole process is necessarily if a high standard is to be achieved. It does not mean you are doing all the work, rather, you maintain communication with the other participants throughout the whole process in any design. For urban design we are mostly interested in complex projects, so for example, I think the standard Greenfield development in Holland is not particularly interesting to us and we also think it is not necessary in Holland — anything that can be developed on a Greenfield site can also be developed on a Brownfield site. So it is also a question of responsibility for cities and urban development as a whole. Generally speaking, in China it is different — there are so many cities with no Brownfield. In find it interesting to look at how environments that often feel ‘instant’ can be shaped, environments that did not have the tie to become places, to grow in to places in the future.”

Have you received any criticism for your work in China?

“One of the most important criteria is whether we think we can deliver quality and this in part depends on the ambition of the client, the program and the economic environment. Another aspect is attainability — we like to be able to experience first-hand where we will design. This is more important for architecture than urban design. For archi-

“For the moment there is no negative feedback. There are however, moments of surprise. For example, in our Shenzhen project we are making a strong case for the preservation of the city’s urban villages whereas the local residents actually do not think that they should be preserved. I also get the impression that the critical discussion in China for architecture and urbanism is quite muted. This seems to go handin-hand with economic success. The problem with any boom is that people become less critical. Another surprise is that in China, commercial space can be considered as (public) places, which may differ slightly from Western attitudes. The thing about working in China or any region outside of your own is that you cannot merely translate what you know one-to-one in to another culture. It is not about building Holland in China.” EDWIN HANS, BART VAN LAKWIJK & SANG HUYN LEE

What are your criteria in selecting projects to undertake?