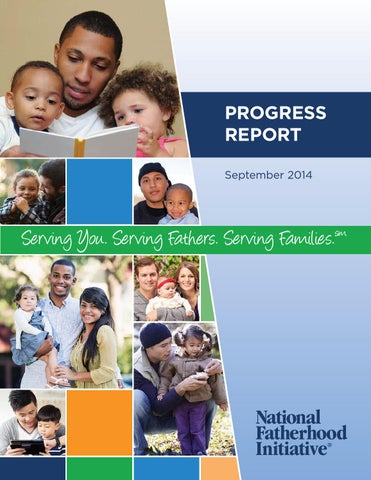 About NF I A “Second Question Organization” in a First Question World National Fatherhood Initiative® is a 501(c)3 nonprofit organization founded in 1994 to reverse our nation’s destructive trend towards father absence. Today, over 24 million American children live in homes in which their biological fathers do not live. On average, these children face a host of risks to their physical, economic, and emotional well-being as a result of living without the presence of an involved, responsible, and committed father. Therefore, NFI’s mission is to improve the well-being of children by increasing the proportion of children with involved, responsible, and committed fathers in their lives. Sounds like an easy job, right? After all, doesn’t everyone want fathers to be great role models? However, NFI is a second question organization in a first question world. Most people who want to help children ask the “first question”: What can I do to help that child in need? That’s an important question. But if you really want to make a positive, long-term difference in the life of a child, you need to ask the “second question”: How did the child get there in the first place? Why does he or she need my help? And further, “How can we prevent future children from needing my help?” More often than not, you will find that the child in a need does not have the love, nurturance, and guidance of an involved, responsible, and committed father. Children from father-absent homes are two to five times more likely to use drugs, live in poverty, fail in school, and suffer from a host of other ills. No other single factor hurts children more than father absence. Recent research shows that father absence isn’t simply correlated with poor outcomes for children, it causes poor outcomes*. Therefore, NFI is committed to addressing the second question by connecting fathers to their children heart to heart. In our first question world most people are focused on intervention, which is good and noble and must happen. But NFI is also committed to prevention. We seek to create a world in which fewer and fewer children need our help because they have great dads who have been given the skills and encouragement they need, via NFI’s efforts, to be the kinds of dads their children need them to be.

We accomplish this by: ■ Developing and distributing evidence-based and evidence-informed fatherhood skill-building resources and programming designed for all types of fathers, used by community organizations, organizations in the corrections arena, and military installations across the United States (and some in other parts of the world!). ■ Helping build the capacity of organizations seeking to begin or enhance fatherhood programs through father-friendly assessments, skills training, technical assistance, strategic planning, and community mobilization around fatherhood. ■ Executing state, local, and government contracts, subcontracts, and projects related to building and implementing sustainable fatherhood programs and services in a high-quality manner. *Brown, C. (2014, March 14). The Proof Is in: Father Absence Harms Child Well-Being. (blog post).

The Father Abscence Crisis In America There is a crisis in America. According to the U.S. Census Bureau, 24 million children in America—one out of three—live without their biological father in the home. Consequently, there is a “father factor” in nearly all of the societal ills facing America today. Research shows when a child is raised in a father-absent home, he or she is affected in the following ways...

AS A TEEN CHILD ABUSE

TO DROP OUT OF

Community-Based Fatherhood Initiatives What Happens When 120+ Fathers Become Trained Dads in San Diego Fatherhood changes everything. Three incredible people in San Diego, California understand this fact because they are training fathers to be better dads. Daphyne Watson, Executive Director of Mental Health America, along with Andre Jones and Aaron Wooten use the 24/7 Dad® program to change the lives of dads in San Diego as part of a fatherhood program called Father2Child. Over the last three years, Father2Child has helped over 120 dads learn how to be great dads. Many of the 120-plus dads have reported learning:

• What it means to be a father • How to better interact with their children • How to work with the mother of their children When asked why he was so dedicated to working with fathers, Aaron said, “I saw too many men meet their dads on a prison yard.” Aaron recalls the following memorable story from leading the group: “A retired police officer helped a young boy from being a criminal, to now the sheriff recently helped him get his driver’s license. He adds, “when you see a father say, ‘this isn’t about me, it’s about my child,’ that’s a dad who gets it.”

Solutions for Incarcerated Fathers Kentucky Department of Corrections is Changing Fathers from the Inside Out Generations of children are growing up without involved dads because their dads are in prison. Eighty-nine percent of Kentucky’s inmate population is male—and many are fathers—fathers who eventually return to their families and communities. Fathers who are connected to their children and family prior to release are more likely to successfully integrate back into the community and less likely to return to prison. The state of Kentucky took these facts to heart and selected NFI’s InsideOut Dad® program to be implemented in their 10 all-male facilities to train and connect dads to their families before release. NFI also worked with Kentucky to create a re-entry program to help dads continue building their fathering skills once released. Kentucky’s DOC works with community-based organizations, via the state’s Probation and Parole Division, to deliver NFI’s 24/7 Dad® program to fathers in transitional facilities and other community-based organizations that help inmates reenter society and the lives of their families after release. By using the InsideOut Dad® and 24/7 Dad® programs, the Kentucky DOC is addressing four criminogenic needs of fathers: criminal and family history, family (marriage and parenting), education and employment, and leisure/recreation. As a result, the state has seen a clear shift in the inmate population from an egocentric attitude, to a focus on their families and children, even from inside prison. In addition to the fathers benefiting from the program, the DOC is meeting their statutory requirement by offering programs inside prison and outside prison while inmates make their transition. © 2014 National Fatherhood Initiative. All Rights Reserved. N  ational Fatherhood Initiative is a registered 501(c)(3) non-profit.

InsideOut Dad® is: ■ The only parenting

programming in 25 state Department of Corrections

Solutions for Fathers in the Military Joint Base Lewis-McChord (Washington State) When dad is deployed, families are affected. Young children are especially vulnerable to a father’s deployment. We must be intentional about helping military families and their children have the greatest opportunity to grow into well-adjusted adults. Nearly half-a-million children younger than six have an active-duty parent. Many children have two active-duty parents. Recently, NFI trained the Joint Base Lewis-McChord New Parent Support Program to deliver both the 24/7 Dad® and Doctor Dad® programs. Doctor Dad® helps the base meet its need to help new and expectant fathers understand infant and child health and child development. 24/7 Dad® helps the base meet its need to provide father-specific parenting education for all dads. The New Parent Support Program at Joint Base Lewis-McChord provides home-based parenting support and education, supported by the Family Advocacy Program. Family Advocacy’s mission is the prevention of domestic violence and child abuse.

NFI is the leading provider of father-specific resources for each of the nation’s military branches. NFI resources have been used with Military Family Programs in all 54 States and Territories, and also in Korea, Japan, Germany, Italy, Belgium, Turkey, The Netherlands and the UK.

State & Local Government Agency Fatherhood Initiatives New Jersey Focuses on Fatherhood NFI has a long history of providing comprehensive trainings and technical assistance on a statewide level and national level. New Jersey is another great example of NFI’s work in this area. NFI was awarded a contract from the New Jersey Department of Children and Families (NJDCF), which is dedicated to ensuring the safety, well-being, and success of children, youth, families, and communities. They were seeking to strengthen the state’s services to fathers, as they had not been serving fathers in a comprehensive, cross-divisional manner. They also needed a systematic way to more effectively measure the impact of fatherhood programming across the state. NFI addressed New Jersey’s fatherhood service challenges by: • Conducting a Father Friendly Check-Up® (FFCU) workshop to help practitioners assess the fatherfriendliness of their locations, and make action plans to facilitate accountability and follow through on specific tasks. • Providing each state office with a 24/7 Dad® Complete Program kit and facilitator training on how to successfully deliver the program in their communities, as well as follow-up technical assistance to ensure effectiveness. • Implementing standardized evaluation tools allowing each office and provider to effectively measure the impact of fatherhood programming. NFI left a legacy of nearly 200 New Jersey state organizations and providers using the same fatherhood program to more effectively reach and serve fathers, allowing for continued peer learning and best practice sharing. As a result of the project, NFI garnered further interest from other divisions within the Department of Children and Families to engage their own staff and constituents around responsible fatherhood. © 2014 National Fatherhood Initiative. All Rights Reserved. N  ational Fatherhood Initiative is a registered 501(c)(3) non-profit.

Military: All branches of our nation’s military are using our resources, globally.

We educate the nation, especially fathers, about how vital a dad’s role is.

Corrections: Our programming is used in pre-release centers, youth programs, jails, prisons, and prison ministries in all 50 states.

There are three key tools we use: Traditional Media: We have appeared in TV, radio, and print media, including The Today Show, Fox News, The New York Times, The Washington Post, Parenting Magazine, and CNN. Research: We produce a wide variety of research on the effects of father absence and the benefits of father involvement. This research is contained in Father Facts 6™, the largest summary of fatherhood research available. New Media: Through our website (www.fatherhood. org), Facebook, and Twitter, are the go-to resource for fatherhood and families.

2. EQUIPPING ORGANIZATIONS & FATHERS By working with local, state, and national organizations across the country, we reach fathers at their points of need with skill-building resources to help them be the best dads that they can be. Our fatherhood resources are used by a wide variety of non-profit and for-profit organizations in all 50 states in the following key sectors: Community-Based: Organizations that are the backbone of our local and state communities, including YMCAs, schools, Head Starts, family resource centers, and more.

We also equip fathers and organizations directly through a variety of programs and initiatives including: The Father Factor™ Blog: Twice weekly posts with helpful tips, tools, and advice for fatherhood practitioners, fathers, and families. Double Duty Dad®: Our mentoring program encourages experienced dads to mentor fatherless children or lessexperienced fathers. FatherSOURCE™: Our Fatherhood Resource Center is the online hub of NFI’s equipping efforts at www.FatherSource.org FatherSOURCE™ eNews: Our free, weekly newsletter for everyone using or interested in NFI’s resources, partnerships, and offerings.

Become a DOUBLE DUTY DAD Become a mentor to a fatherless child in your community. Visit doubledutydad.org for sign up.